I've had quite a few questions about how I paint my rusty metals, especially since starting the undead/skeletons. I've previously given a brief description and a pic of the paints I use. I also mentioned possibly doing a step-by-step at some point. So... here it is.


Previously, I took a pic of the paints I use. This occasionally varies a bit, but is usually similar. Pretty close to the step by step below. Sometimes I add a reddish-brown before the darkest orange. I've also started to abandon the Citadel metallic paints, as the quality seems to be in decline recently. None of this is required. I'm experimenting with homemade washes, for example. And I've also found a P3 orange that I really like and sometimes use in place of the middle orange. Whatever feels right for any given figure or project. "A foolish consistency is the hobgoblin of small minds." (Emerson.) 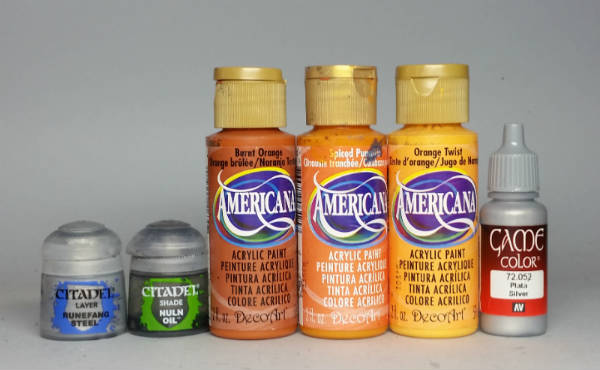 1. Metallic base. In this case I did a Vallejo silver, then a Citadel Nuln Oil wash, then highlights of silver, and then a second wash. Normally I would only do the two steps, but since this figure is almost nothing but armour, I wanted to spend some extra time on it.

2. First layer of rust, with the darkest orange. This is applied with the tip of a fairly large brush, in a manner not unlike stippling. I usually refer to it as "brush mashing," though it's a little more delicate than that may imply. Still rough on the brushes. (I rarely spend a lot on expensive. brushes.)

3. Second rust layer with the middle orange. This overlaps the first layer to a large degree, but not entirely. In this particular case, this color/bottle of paint is not as opaque as the others, which I really like. More brush mashing.

4. Third rust layer, with the lightest orange. Still brush mashing, but more delicately. I like smaller splotches of this light color. Again, quite a bit of overlapping with the two previous layers, but not entirely. This third level really gives some punch to the depth of the rust and color on the figure.

5. Translucent blacklining. Remember blacklining? It was one of the early painting techniques I learned, and seems to have fallen out of favor as being a bit harsh. Never throw anything away -- including techniques/skills. You never know when they might be useful. Take a look at the difference between steps 4 and 5. Tell me which one looks more like a coat of plates and which looks more like a rigid rusting statue. In this case I have replaced opaque black paint with a thin wash -- in this case using Citadel Nuln oil, but (again) a home-brewed thin ink wash would also work. Using a very fine (and possibly more expensive than the others) brush, give a quick black line under each of the armour plate joints and other spots in heavy shadow.

6. Highlights with silver. This compliments step 5 somewhat, but also gives a bit of "life" to the rusty metal, by (hopefully) giving the appearance that the metal is still in use and rust is being scraped away. So with that in mind, I use technique that's somewhere in an intersection between drybrushing, overbrushing, and feathering. I use a pretty dry brush, and I tend to hit the edges as in both drybrushing and overbrushing, but I also like to feather the silver into flat areas too. So it looks like metal plates scrape against each other, ridges rub against other objects, and blades actually cut through things -- all scraping away a bit of the rust, exposing steel (or whatever) beneath.

7. The metal is the same as the previous image, but with non-metal details painted, and the photo not a over-exposed as in step 6.


So that's it. My rust. Not rust. Just mine. Take a look at rusty objects. Take pics and start a collection. I did. Then see what you think will look good on figures. I like this version of rust because it stands out, yet is still harmonious, with the rest of the colors I've been using.


Posted by ZeroTwentythree at 1:19 AM