Another Half-orc -- and more in the future?

I ended up ordering the second figure that I had been considering for a half-orc shaman. Shawoman? Maybe priestess is better. She looks more refined than the connotations "shaman" usually carry. And to be honest, with her attire, the jar in her hand, and the staff -- I'd be half tempted to use her as a priestess of some sort with the Merienburders.

I had initially wanted to replace the jar, but it would require completely re-sculpting the hand. Not something I'm in the mood to do right now, but I can always pick up a second miniature and do that in the future.

Speaking of the future, two things on my mind regarding half-orcs today. One is that Black Tree is doing another 50% off sale and I'm tempted to double my half-orcs. I'd like more variety, but I do really like these figures. So that got me thinking about head-swaps, which, in turn got me thinking about... Two is that I should try sculpting some oalf-orc heads aesthetically resembling (as best as my meagre sculpting skills will allow) that could be used on some of the plastic human kits to turn them into half-orcs. I'm thinking along the lines of some of the Frostgrave plastics, but possibly also plastics or bits from Perry, Gripping Beast, and/or Fireforge. Maybe a big mix of all of those for a more irregular look.

At any rate, back to the new priestess, from Reaper, alongside samples from the rest of the clan: 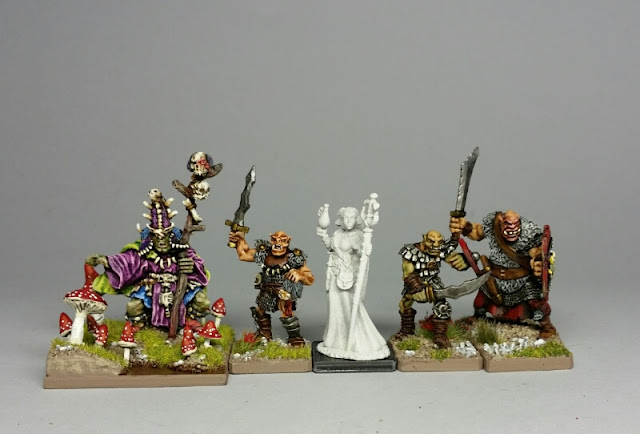 She's a little taller than the average troopers, but that's OK. She's also standing more upright than any of the others as well, including the larger shaman and warrior.

Posted by ZeroTwentythree at 9:21 PM