My Bones 3 KS figures came in. Plus I picked up a pack of 3 of the Bob Olley orcs in Bones to see if they would fit with the recently nearly completed half orc unit. I thought I would post a few comparison pics. I didn't get a ton, but this isn't pics of everything either.

The best two figures from the "Lords of Undeath" are the two big guys. The halfling is OK, and I'm not sure I will ever use the elf & dwarf (not pictured.) The latter three are skeletal, but have pristine clothing, equipment, and hair -- which seems a bit odd. The two big ones shown here compared to skeletal ogres from Krakon Games, RPE, and the one I picked up (via FB) from a small personal project someone had cast. I think these will all work pretty well together!

Bob Olley orc in Bones material next to a couple of the half orcs. Nice figure, but unfortunately hot certain I like them together. I also realized I should show a scale pic of the half orcs next to my standard reference. 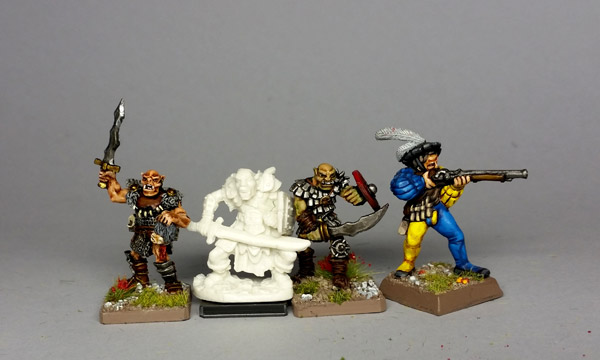 One of the most fun minis from the KS. GOREMAW. Sort of an impulse buy, a ridiculous miniature I just had to have & paint. I think it will be a big nasty summoned by Fomorians & others. Pic next to the Fomorians/Fimir, plus the (formerly) largest critter in their arsenal -- Reaper bog demon. 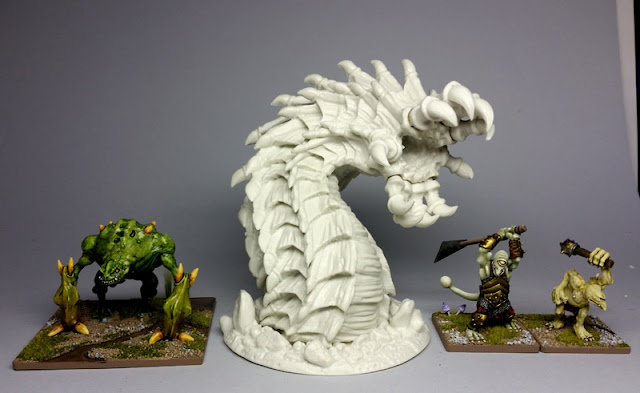 Reaper is "super sizing" their giants. I've got mixed feelings on this. I felt the fire giant queen I previously painted (second pic) was a great size for a giant, that bucked the trend of "bigger is better." Maybe hypocritical of me to say that given some of the enormous models I've picked up and/or painted the past few years. But in terms of background/setting, etc. I really do like the smaller ones -- and she was really well sculpted (and a nice casting, give that she's also in Bones!)

So here are some of the "super sized" fire giants, next to the old-ish Citadel giant, and the earlier version of the fire giant queen mentioned above. Definitely going to need some work on the bendy issues, but looking forward to seeing these painted up. Someday. 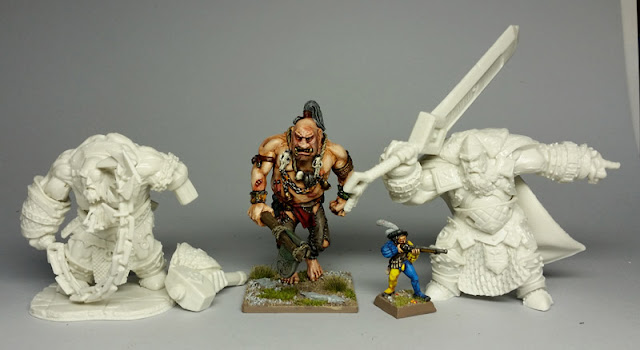 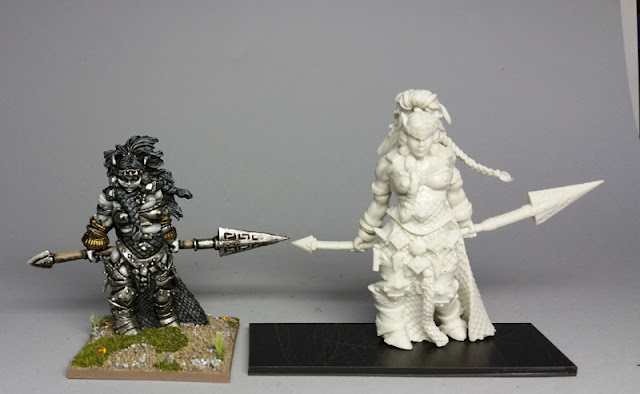 Also in the package is a restock of conversion fodder for my Fomorians. So those are back on teh menu now that I finally have more bodies to work with!

Posted by ZeroTwentythree at 9:46 PM