A few more half-orcs done. Just five more left -- including the three command figures. Plus I need to do a banner (and maybe go back and paint designs on the shields.) 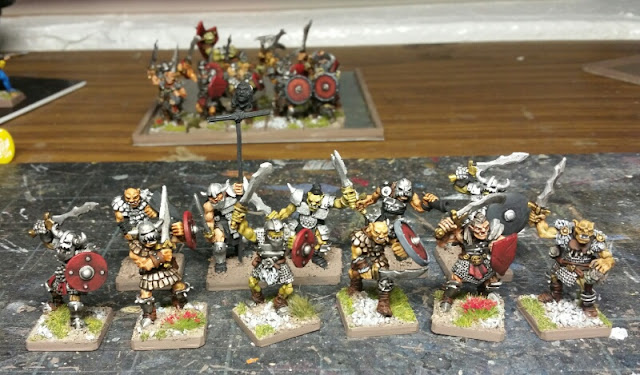 I realize this may not be exciting, given that it's just another handful of the same stuff I've been working on. But it's motivation for me as painting time (or any free time at all) becomes increasingly scarce and everything else becomes more stressful.
I also bought a figure to use for a shaman on eBay, who should be here later this week.

On a longer term, more ambitions note, I think I'd like to get & paint a small unit of half-orc scouts, and a second formed unit of melee troops.  That should make a nice little mercenary force. Something a little more than a single unit, but still small-ish. Right now I'm not buying any new figures though, so I'll have to paint up something else that I already have in my possession.

I'm thinking more about the fringe mercenaries, outcasts, and so on. Still haven't decided what to work on next, though.

Posted by ZeroTwentythree at 1:46 AM