Back in the day, I would post detailed battle reports of each game after events, whether tournaments, convention or demo games, etc. Sadly, this is no longer "the day." So it will just be brief summaries this time around, with just photos from the start & end of the games.

Slaughter Fest was a 2000 pt. Kings of War tournament held at Recess Games and, if I understand correctly, associated with and/or organized by members of Ohio War Kings.

It's been over a year since I last played KoW, I only had something like 6 or 7 games under my belt, and I've been suffering from some rare (for me) pounding headaches the past few days... so it was going to be a rough return to gaming. But I managed to play by something pretty closely resembling the rules.

I had an all skeleton Undead army. I had to fake it a little bit, since my skeletal ogres were proxies for zombie trolls, the black knights were proxies for soul reaver knights, and my "lesser liches" were necromancers. But it worked. I took an allied horde of skeletons from the Empire of Dust so I could add an undead giant to my list. Lord (of undeath) knows I've got enough of those things painted, I wanted to use at least one! 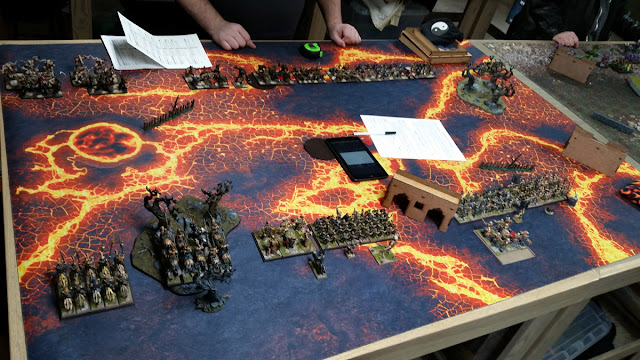 The scenario involved killing the three highest point units in your opponents army. I completely blew the deployment as I was just dropping units without paying attention to what John was doing until the very end. He's got a bunch of zombies on my right, and heavy hitters on my left. I managed to redeploy some of my faster troops, and nearly pulled off a draw (botched the last dice roll of the game, which would have given me a draw.) But really, even that depended on the solidity of the soul reavers and some lucky dice rolling. Except nerve rolls. I couldn't even route small unit of zombies, or more importantly the last unit of lycans I needed to destroy.

Given that the table looks like some sort of lava field, I will blame my loss on the lack of a "fleshy & hairy troops burst into flame" rule, and dodge personal responsibility. 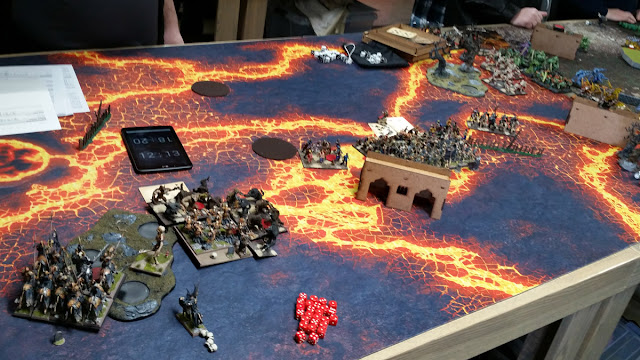 Second game was against Grace's elves, which was four hordes of archers in the center, drakon hordes on each flank, supported by a drakon hero on one side, and giant tree/ent thing on the other. 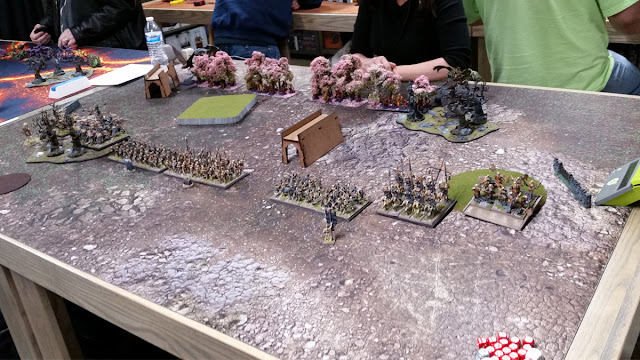 The scenario was Plunder, with 5 objectives. We sort of botched that and started picking them up and carrying them around when they should have remained stationary. We "reset" the objectives in the second to last turn of the game, and ended up with a draw. Our attrition scores were almost equal as well. Again, I've got to credit some lucky dice to me even doing as well as I did.

Grace said the army was borrowed, so I don't know who gets credit for the figures and movement trays, but they were very nice. 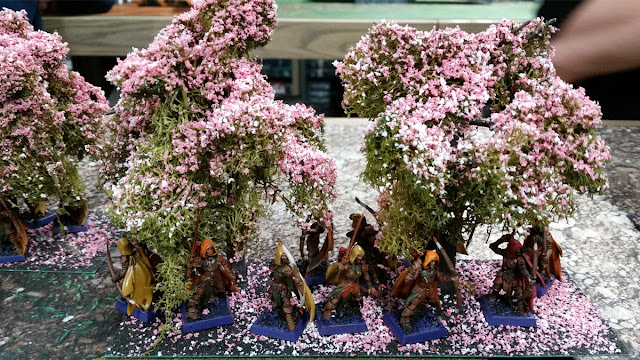 The game ended with a big rumble on top of one of the objectives -- which went very poorly for Team Undead. 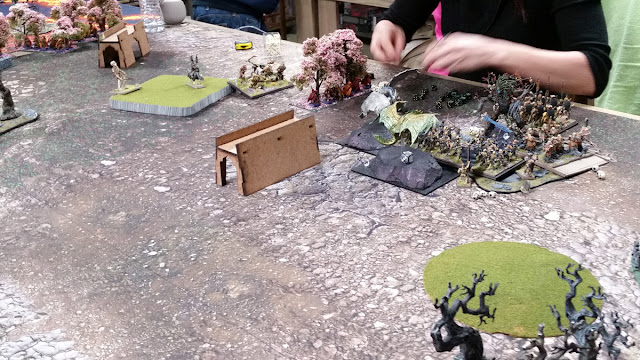 Third round was against Felix & his Herd. Beast pack speedbumps, some sort of badass guardian things, more lycans (which I faced in three of the 4 games I played) and a stampede horde. 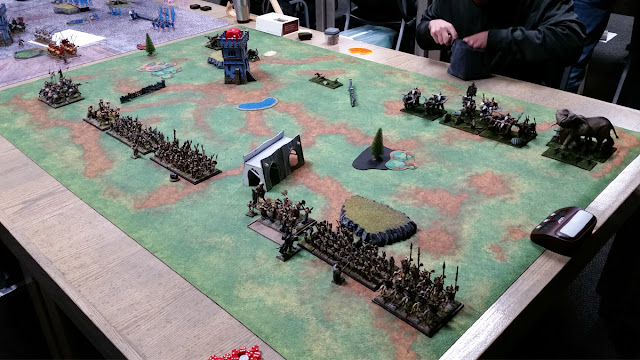 Again, I just sort of dropped everything on the table, only slightly paying attention to my opponent's deployment. This was made more apparent when Felix moved everything (they moved fast) on my left across his deployment zone on the first turn. I was mostly able to manage this, as my own left was fast moving as well (soul reavers and wraiths), and ended up turning the flank. He did the same with his "freight train" on the other side, so the whole battle sort of rotated clockwise. I forget what the scenario was, but in essence it could probably be called "bloodbath." There was a scenario point awarded for yelling "_______ for the ________ god" at some point in the battle. It could only be earned once, but that didn't stop me from yelling various iterations several times throughout the game, including when my own troops were being ground into dust by massive elephants.

Another draw. By this point I think I was starting to get a grasp on the rules again. 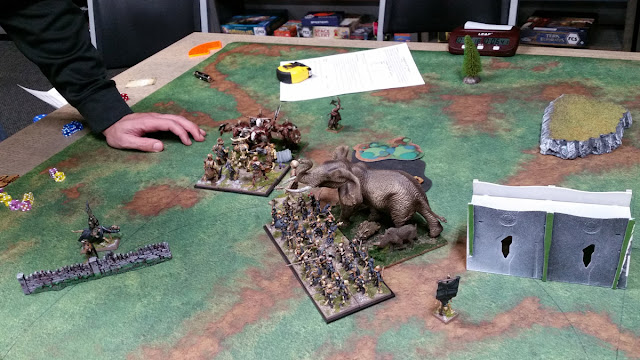 Last game of the day was against Kim's dwarfs. A lot of berzerker brock riders, more lycans & beast pack speedbumps, and a couple of flame cannons. 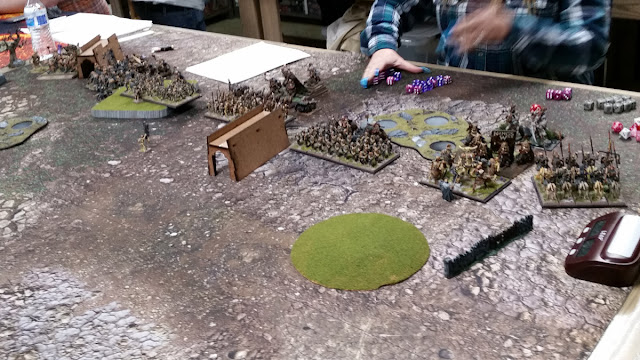 The scenario was dominate -- so we had to hold the center. For most of the game we both completely forgot that, only racing to the center at the very end. Again, it ended in a close game, both in terms of attrition and the final victory. As much as we tried getting everything back to the center, only one single unit (my wraiths) made it entirely there. If we had rolled for a 7th turn (which we didn't) I probably would have had one more unit there, but Kim probably would have managed at least two -- so possibly a draw or a victory for her if the game had gone on longer.

So I managed to barely squeak out a victory in the last game -- no final photo, unfortunately. At this point I was a bit out of it, between the headache and being tired. Apparently grandpa ZeroTwentythree can't handle his tournaments like he used to.

I finished 14th out of 20 players. All things considered, I'm OK with that. A far cry from my somewhat more competitive days of playing WFB or WAB. But I had a lot of fun, enjoyed meeting some new people (including some locals, it appears) and getting reacquainted with the Kings of War rules. I am completely sold on KoW. I think I already was, but now I'm even more certain. It's got a lot going for it. Simple rules that are easy to pick up, without getting bogged down in redundant detail or rules-lawyering. The end result is that it plays in a satisfying way. It feels like a wargame, rewards good tactical decisions, and has a nice degree of balance. While not 100% balanced (and what game is...) it still doesn't feel like there are any overwhelmingly bad or broken units or armies that I have seen so far. But at the same time, it's not a completely random dice-fest. Good tactics go a long way.

There were a lot of prizes that were raffled off, plus some give-aways. No one else seemed to be interested, so I eagerly snatched up the large sheet of brown/green "teddy bear fur" for some terrain projects. I had looked at buying some online before, but never did -- so now I've got some to experiment with. It honestly looks large enough to work as a full battle-mat! Or, as I joked at the event, I could cut a couple of holes in it and wear it to the next one... 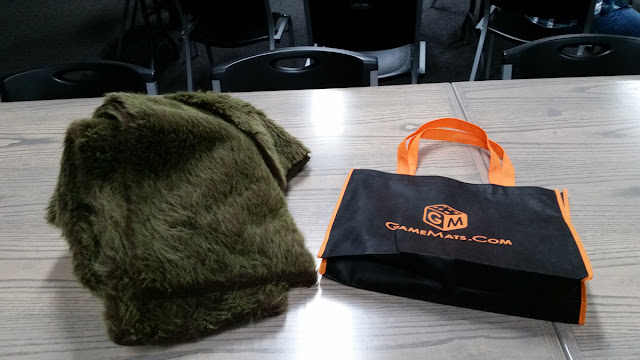 I took a bunch of photos of the armies at the event, but a lot of them didn't turn out well -- either blurry or too dark to see. Below are those that turned out OK. Check out those LED lit golems! (Or elementals -- whatever they are.) (Click to gigantisize. They're straight from my phone, no editing or resizing...) 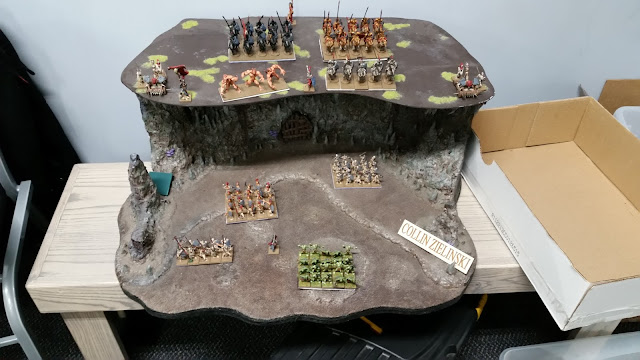 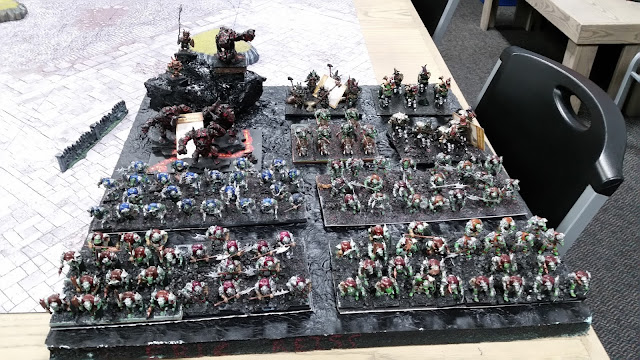 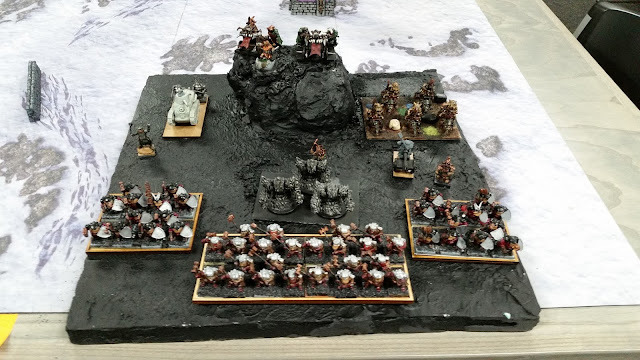 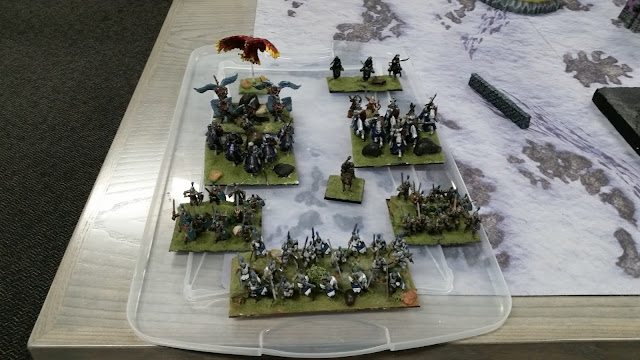 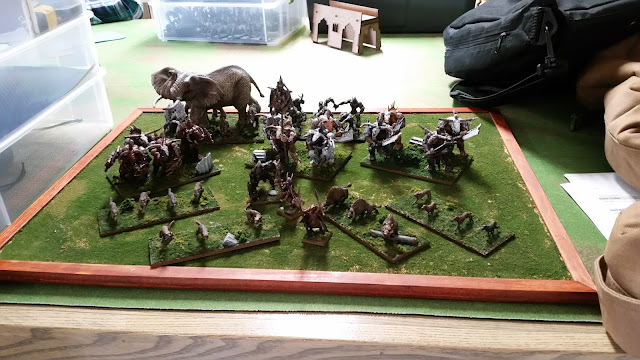 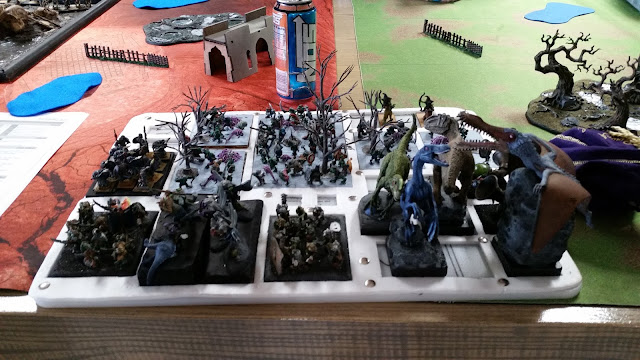 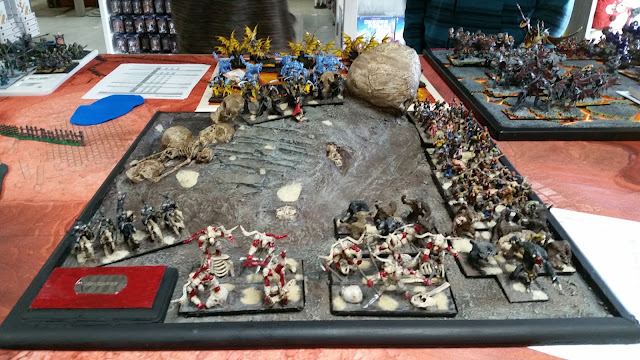 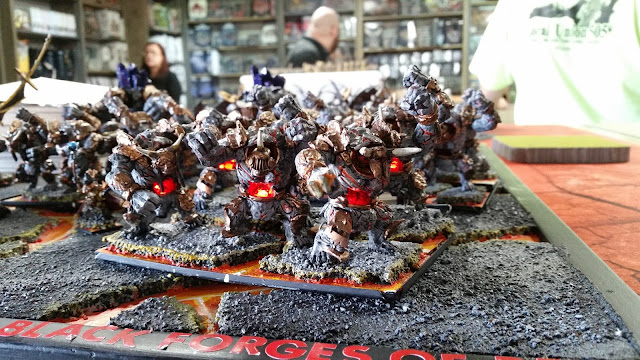 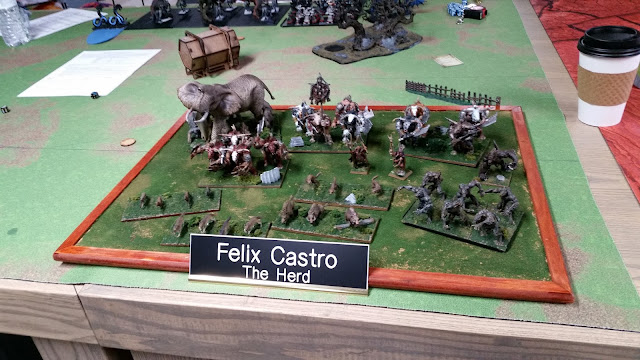 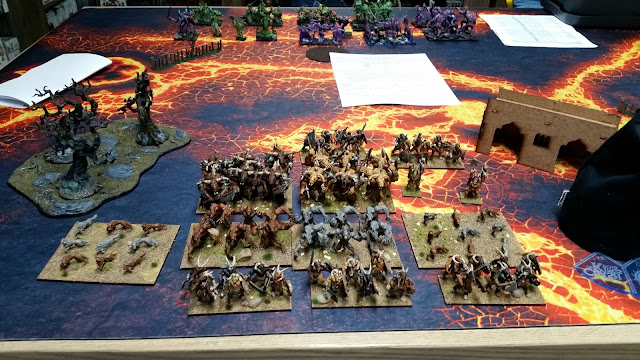 Posted by ZeroTwentythree at 1:47 PM