This started off with the idea of adding additional support to the Sea Elves I finally painted for last year's OWAC. As I was painting them, however, I started thinking about them a little differently.

Sea Elves, yes, but part of a small sub-faction. Whereas the rest of what was previously painted are troops from the merchant houses and their vessels, there are other Sea Elves on the fringes of that Marienburg society. These are privateers in direct service to the Marienburg's Directorate. Sometimes they "stray" into selective piracy. They're tolerated by the mainstream Sea Elf community, but only barely. To the Directorate, however, they are far more useful, if occasionally difficult to control 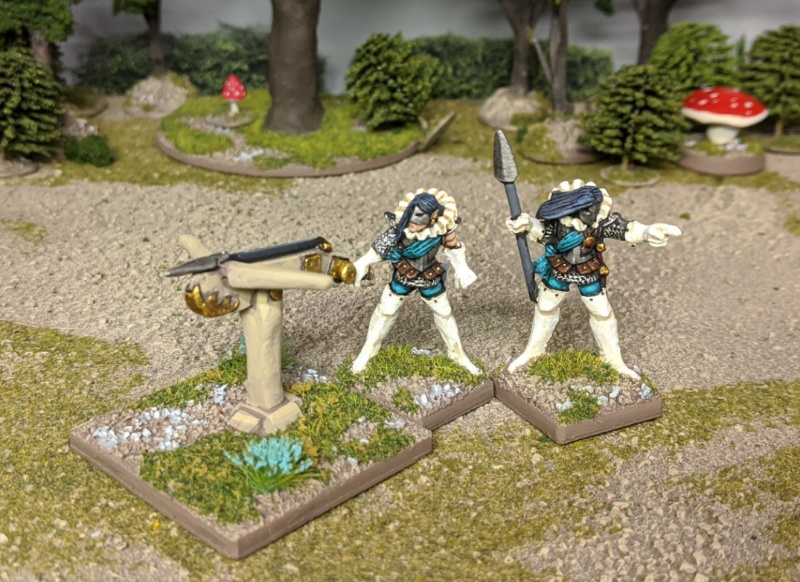 The figures are from Grenadier's Fantasy Warriors dark elf range, now produced by Mirliton. I like the crew, though the ballista is a bit questionable. I'm not sure I like the color I painted it, either.

I am considering trying to get a small regiment of the infantry and, as mentioned above, utilizing a regiment plus bolter & crew as one of my home-brewed "Regiments of Renown" or OMFG mercenary regiments.

I got this set last year but didn't get to paint it for the OWAC. I was inspired by the ruffled collars and tall boots looking like Blanche-esque nod to 16th/17th century fashion, and a social media comment by Trish Carden about some of her Marauder elf sculpts being inspired by the New Romantics aesthetic.

Posted by ZeroTwentythree at 10:49 PM