Day two and I'm ready to go, with a respectable 2-1-0 record I'm fairly optomistic. When I see my next opponent is dwarves, I'm pretty pleased. I've probably got more experience against dwarves than any other army, and althtough they're usually not a pushover, I feel like I've got a decent chance, know their tricks, etc.

From left to right, he's got... slayers, bolter, hammerers and longbeards or ironbreakers (I forget which), thunderers, cannon, bolter, gyrocopter, crossbow, warriors and an organ gun.

Please note: no anvil. My opponent is a brave man, I give him piles of credit for not taking one.

The first pic is actually part way through turn 1. At this point his organ gun is already dead, his gyro is on my side of the table and wounded (to the left of the woods), and I've surged forward a bit, except on the right, where I was hiding from the artillery. 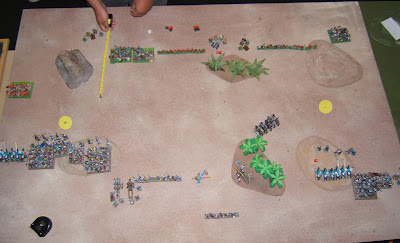 I make a move to nab the objective on the left, and isolate his slayers, who shouldn't be a threat, but will take a lot of effort to wipe out quickly. I figure if I can get rid of them, then I should be sold on that side. My handgunners get hosed by the gyro and his thunderers, but my pistoleers finish of the gyro.

Our artillery trades shots, as it does for most of the game. 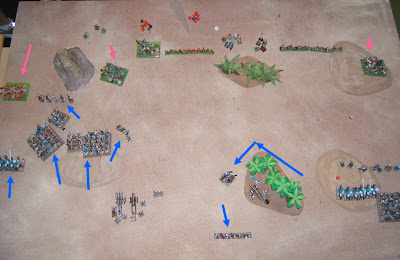 His slayers don't take the bait and charge me, so I hold tight near the hill hoping to avoid his tin can stumpies, and maybe nail them with some lucky rocket & cannon shots. With the dwarf artillery partly neutralized, I start making my move on the right. 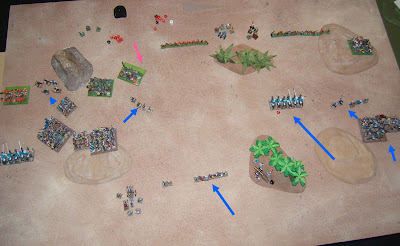 I finally lose patience on the left and charge my knights into his slayers to tie them up, and move my two big infantry blocks plus their detachments into position to accept some charges and sit on the objective. I surge forward ont he right, and his warriors crest the hill with no more artillery to fear anyway. 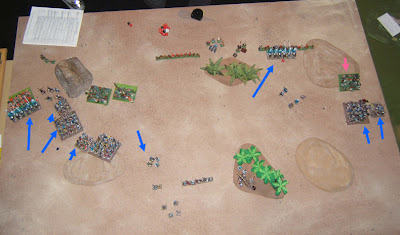 My knights eventually wear down and wipe out the slayers. The knights on the other side crash through the crossbow and set up to charge the remaining artillery. The greatswords manage to get a charge and detachment support against he warriors, breaking them and overrunning up the hill. On the left, things get a little hairy.

He charges, I have numbers and ranks on him. However, the incredible amount of death that elite dwarves quipped with rune encrusted thanes can put out, combined with the T4 and knight-like saves that prevent me from causing any wounds, totally overcomes all advantages I get with the detachment system. I break like a twig and flee. The only things that save me are outrunning the little stumpies, decent rally rolls, and the fact that I started with large numbers. I give up the objective and a standard, but my army remains intact. On the right, I move back down the hill to cuddle up with the other objective and end up with a win. 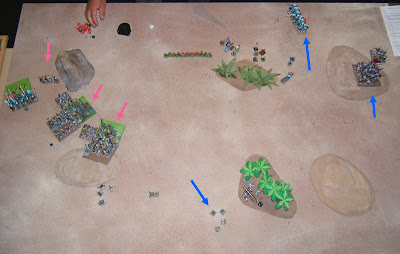 So I'm 3-1-0 and going into the last round, I'm fearing that I'm going to end up facing one of the many many daemon or VC armies....

Posted by ZeroTwentythree at 8:41 AM