I don't even remember the scenario on this one. I think it was just a pitched battle. So we square off...


He's got, from left to right, bolter, warriors, hammerers, bolter, crossbow, something in large numbers(warriors?), slayers, organ gun, thunderers, gyro, and an anvil along the back edge of the table, behind the hill.

First pic shows some of his opening moves... 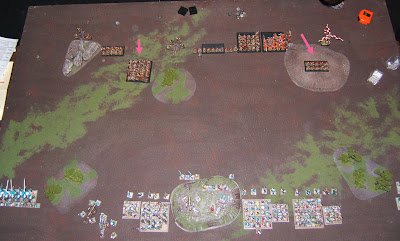 On the left, we both move quickly to cross the killing zone in the center. I'm running my knights at his bolter so that I can breath a little easier, and hopefully still have time to go on a rampage behind him. My handgunners walk down the hill so the artillery can fire, but manage to get pretty shot up, which is actually par for the tournament with the handgunners. As this is still a learning experience and I'm a bit of a new empire player, I've decided that handgunners just kind of suck.

Back to he action... In the center, I convince myself to hold back and try to blast off some ranks and/or get my cav into position. Sadly, his anvil and gyro keep my cav bottle-necked between the woods and the table edge. A blast of gyro steam sends a detachment fleeing. 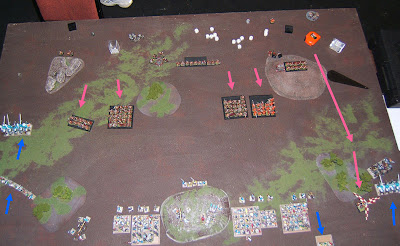 This next part is kind of funny, from my point of view... I charge the gyro with a small archer detachment, he gets stuck pursuing into my spearmen, who in turn beat him in combat on his turn, then charge it and force it to flee off the table on my turn. My pistoleers get anvil-blasted to dust, but at least my knights can move. His bolter gets smashed by a cannon shot, so I turn my knights into his small unit of warriors instead. They flee. His hammerers charge my greatswords (and get counterchaged). I move a couple of archer detachments to the back of my deployment zone to discourage potential miner entry. 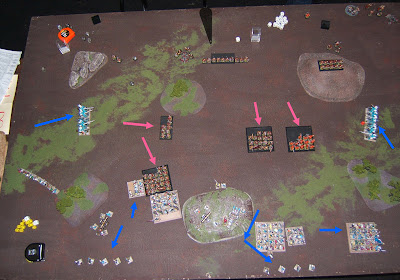 Miners appear anyway, and eventially I think they ran over a cannon on the hill. After winning several rounds of combat against the sttubborn hammerers without getting lucky and having them blow a break test, my greatswords fail theirs and get run down. The knights on the left chase the warriors across the center of the battlefield setting up the... center-right fustercluck. My swordsmen end up facing off against his warriors, without the support of their detachment because they've fled the slayers in order to trap them with the spear and knights. Surprisingly, I win combat and they run. I pursue, but fail to catch them. The slayers end up wiped out (I think?) by the end of the game. His larger unit of warriors rallies. In my final turn, I elect to charge the smaller unit instead, figuring that it's the easy VP, rather than a less certain battle frontally against warriors with two ranks. I win, run them down, and as a second surprise, the larger unit fails its panic test with no remaining turn to rally. 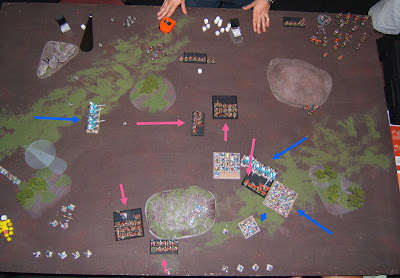 In the end it came down to a dwarf victory by under a hundred points. Due to a hectic VP counting phase in which everyone around the table was shouting out numbers, VPS, objectives, etc. we failed to include my capture of the dwarf warriors standard, which would have turned it to a draw. I'm a little bitter, even though I know they were only trying to help, as my record would have been 3-1-1 instead of 3-2-0, but it still wouldn't have changed my placing in the overall rankings. I also don't feel too bad about screwing up against this particular opponent, since it was one of the best/closest games (along with game 3 vs. TK) I had.

So, like I said, my record ended up 3-1-1. All 5 games were enjoyable, and all 5 opponents were excellent. I'd easily play any of them on a regular basis. In fact, my observation is that the whole tournament was generally good natured yet competitive.

In the end I got player's choice and second overall, the latter came as a bit of a surprise to me. The first place winner was way ahead of the rest of us, but it seems like there was a large group fighting closely for the next few slots. My final opponent scored best general. (He also got one of my two votes for sportsmanship.)

For prizes, I got to take home two selections from a table full of stuff. I picked up Gaulrach (sp?) the chaos dragon because I like the figure and have a sneaky conversion idea for him, and a box of fleshounds because after long years of playing horde armies, I'm contemplating playing something as totally different as possible, for a change. (Though in hindsight, I don't think it's going to be daemons.)

Posted by ZeroTwentythree at 8:47 AM