I was pretty excited about facing off against this army. It's likely going to be my next AoC army, since it can be used equally as an opponent and ally for the Burgundians. I was hoping to play this match up since I first saw the army listed on the roster.

The scenario was a take & hold game, with the objective in the dead center. We had a nice open centered table for this. We both used our big 2250 lists for this game. My reasoning was more guys = more potential for holding an objective. 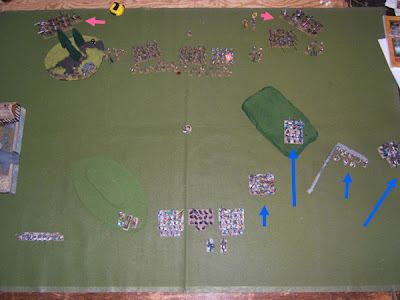 From left to right in the photo, my opponent had knights (mercenary?), skirmishing handgunners in the woods, light gun, two units of pike and one unit of planconier, with two units of skirmishers in front of them, followed by one more gun, another pike unit, and light gun #3. Behind the rightmost gun was a unit of sergants.

From left to right I had crossbowmen with pavise, set up at what I was estimating to be enough to shoot the handgunners while forcing them out of the woods to get me in range, my gun on the hill, archers (again, with the nad-and-a-half swords), pike, more archers, a big unit of dismounted gendarmes (I needed to fill points somehow!) coustilliers, gendarmes on the end, with skirmishing handgunners in front of them. 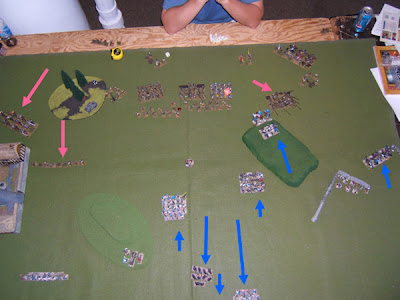 Our first few turns were somewhat mirrored, except for one vital detail. We both moved up on my right, held off and shot on the center and on my left. The big problem was two-fold. One, his shooting was more effective. Two, his more effective shooting set off a chain reaction of panic that saw my pike unit, general and army standard off the table by the second or third turn, and two further units panicking and running away, taking them out of the game for an extra turn or two. 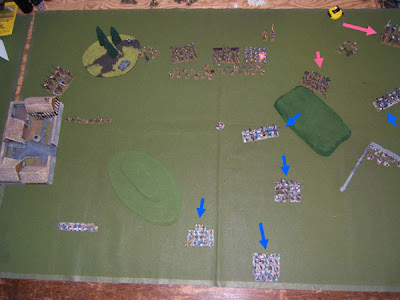 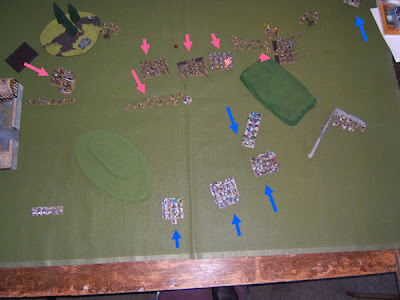 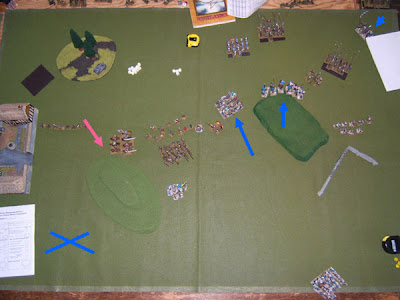 That was a large part of the game. After that, I figured I had two choices, either conceede or try to inflict as much damage on him without hope of holding the objective. Maybe as a bonus I could at least deny it to him, but it would take a miracle for me to win.

I at least feel that put up a really good fight. My gendarmes easilly beat his light cav on the right, but did little else. In the center. My ordonnance archers fought a good fight and took out two of his formed units, though I lost one of mine in the process. As expected, though, he I coulnd't prevent him from taking the objective, which pretty much sealed the win for him. I feel good that I at least made him work for it.

Posted by ZeroTwentythree at 8:46 PM