It's been quite a few years (6? 7?) since I've played WAB at all, and about just as long since I've played at any public events. Since I've picked up again (both WAB and gaming in general), two medieval suppliments have come out for WAB. While I was exceited about this, since it's is a period I really enjoy more than any others, I was also a little nervous, since I didn't have any experience with the books/lists in the division.

I was rushing to paint figures to the very last day before leaving for Historicon, and I'm still beating myself up over brining a not-even-half-painted unit of pikemen to a tournament.

For the medieval division, we had to bring 3 army lists, one each of 1750, 2000, and 2250 points value. After being given the scenario and paired off with an opponent, we each had to secretly assign a list, using each one only once. For each game, everyone I spoke with (and played against) used the same sized list. I liked the idea, though, as I believe "even" battles can get boring, even in a tournament seting. (Especially since I'm not too hung up on the OMG MUST WIN aspect of tournaments.)

On with the games...

I've been avoiding mentioning many names, since I'm not sure what the proper ettiquite is for writing about other people on the internets without their permission, however, I think I'll be OK statting that my first game was against none other than Rob Broom from Warhammer Historicals. He was using a beautifully painted loaner army of Ottoman Turks. I gave him (and the rest of my opponents) advance warning not to let me try sticking 7th ed. WFB rules into the game.

My fears of not knowing what to expect surfaced Game 1, since I don't have the Vlad book, and only know about the Ottomans in very general terms from history classes/books, but know nothing about them in WAB terms. I was hoping history wouldn't let me down, and in the end, it didn't. 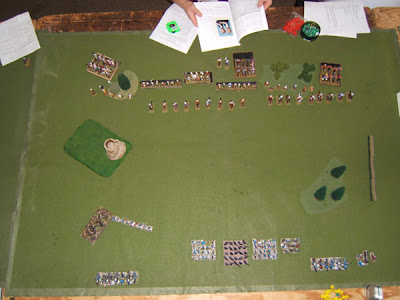 From left to right I had... household gendarmes. Wait. Before going any further, I've got to admit, this was probably the dumbest thing I did all day. The thing in front and just slightly to the left of them was an impassible piece of impaled corpse terrain. I wanted to keep them "in reserve" but what ended up happening was they had nowhere to go. In addition to this, the general was in the unit, precisely where he shouldn't have been -- away from granting his LD to the rest of the army.

In front of the gendarmes were crossbowmen, then two units of ordonnance archers with hand-and-half swords flanking a unit of ordonnance pike. To their right were dismounted gendarmes, mounted coustilliers, and a light gun.

Both Rob and I used our 1750 list for this round, which was a meeting engagement scenario, in which we had to set our deployment order ahead of time.

I figured that since he was more lightly armoured and more manuvarable than I was, my best bet would be to stick close together, take as many missile shots as possible, and try to set up multiple threats for him as he approached. This was part of my thought process as I was deploying, so I set the cannon and coustilliers on the right just hoping that it would be enough to discourage anything from going around the woods on that side.

I concentrated on trying to panic his horse archers first, and had incredible luck doing so. However, right from the start, I was in trouble on my left. I just couldn't move my gendarmes quickly enough, and when I deployed the crossbow to get potential shots at troops on the hill, I also opened them up for the eventual cavalry charge from out of my own LOS.

One saving grace was that Rob also put his general out on the same flank. Although he got one unit of horse archers to rally, his Serbs panicked at their first (and only) missile casualties. This bought me some precious time.

I blew a combat vs. the janissaries with one unit of my archers, but to balance this out, I also panicked his elite cav unit (including general and army standard) at the end of the game. 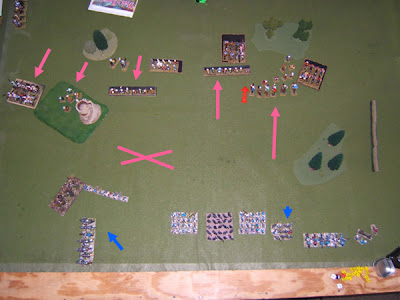 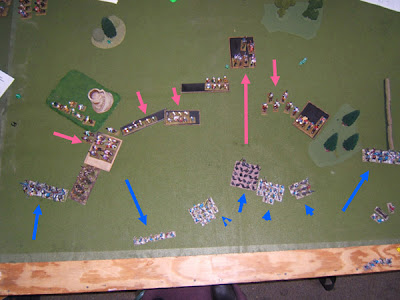 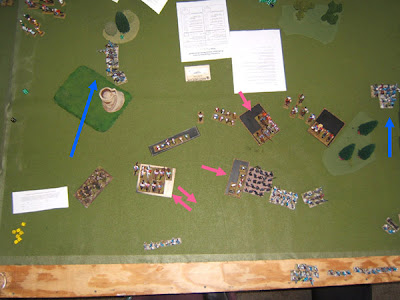 It was a well played game, if somewhat unexciting. In the center, I was just too slow to press a charge against him (without a few more turns to the game) so I tried to make any of his potential charges seem like a really bad idea. So we ended up having a bit of a staring & shooting match, and ended with a draw.

Honestly, given another turn or two it could have been a totally different game. My gendarmes and coustilliers would have finally been in the game, his Serbs came back as well, and he most likely would have got his sphahis back as well. Some games just take longer than others. ;)

Posted by ZeroTwentythree at 8:40 PM