I'm playing in a 3 round WFB tournament next weekend and I need to get some last minute painting done to run the list I'd like to bring with me. It involves some troops I've not used before, namely the Plague Furnace, Poisoned Wind Mortar and some Plague Censor Bearers. I posted a pic of the Mortar conversion a while ago, and I'm almost done painting it. The PCB's I've had for years, but never used them in the old book. I've started painting them.

Then there's the Furnace. I bought one a while ago, and assembled it yesterday. As I phrased it elsewher,

I now have many holes and cuts on my hands. Keep in mind, I am by no means a beginner modeler, either.

Here's an artist's concept sketch of my model by the time I finished assembling it: 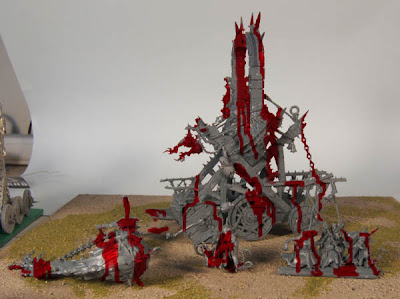 To top that off... and please note, the Plague Furnace is, not surprisingly, an engine to spread disease and contagion... this morning I woke up sick.

Coincidence? I think not!

On the other hand, I do have to admit, it is a really nice kit. A bit over the top and huge, but nice. I'd even say I'm impressed. I assembled and started to paint the plastic Empire steam tank a while ago, and that was a nice model, but this is well above that in terms of detail and complexity. To top that off, it was also very cleanly moulded -- which is a very good thing. I can't imagine trying to clean ugly mould lines off the entire perimeter of some of the larger/spikier pieces.

Now the trick is to paint it. In a hurry!

Posted by ZeroTwentythree at 7:46 PM