Over the weekend I played a 3000 point game of WFB. It was my Skaven vs. a friend's Orcs & Goblins. We used a 4x8 table and the terrain generation rules from the book -- though we dropped our total number of terrain pieces from 10 to 8. We randomized the scenario and ended up with Dawn Attack. Both of us ended up with several units deployed on our own right flanks, with nothing on the our lefts.

So here's a rough layout of the start of the battle. 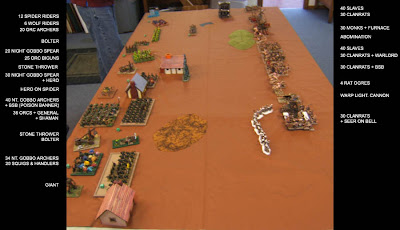 In the distance, the black blotch is a Sorcerous Portal. The building was a Tower of Blood -- or in our case, a Library of Bloood. The settlement in the center of the O&G deployment area contained an Elven Waystone. The rough patch in the foreground was a Khemrian Quicksand, and the building along the edge of the battlefield in the forground was a Dwarf Brewhouse. 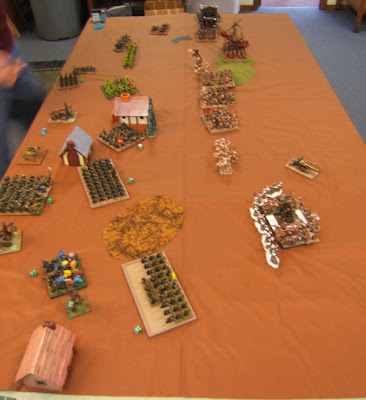 The greenies go first and more or less surge forward. A few blown animosity rolls leaves the general's unit squabbling along the back edge of their deployment area. The small unit of wolf riders are used to slow down my plague monks with a bait & flee. The Abomination takes a few wounds from a bolter, and the Warp Lightning Cannon (WLC) misfires and shoots off in a random direction off the Skaven table edge. 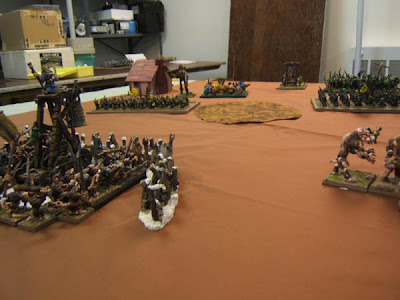 View of the battle from the Grey Seer's Bell tower. 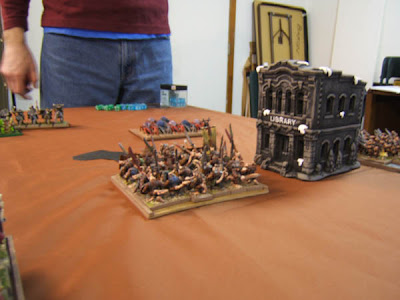 View of the opposite flank, from the point of view of the Plague Monks. Clanrats and slaves rush around the Library of Blood to engage giant spiders and their invisible riders. 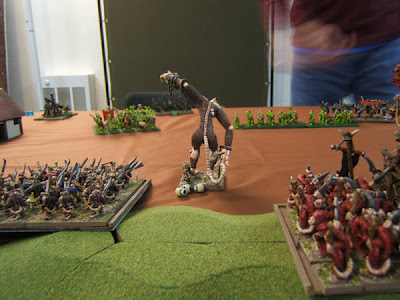 View of the Abominations ass. Plague monks to the right, slaves to the left. Lots of Orc shooting in ahead, plus a solid unit of biguns and their supporting night gobbos. 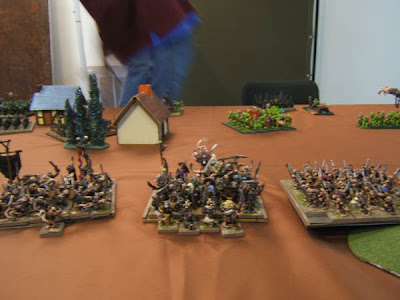 View just to the left of the last photo, right behind the skaven Warlord's unit. BSB is in the clanrat unit to the left. Night gobbos skulk through the settlement across the field. 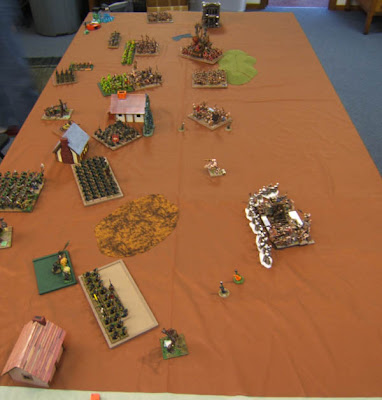 In the distance, on the Skaven right, the slaves have chased down the spider riders and keep the rallied wolf riders at bay. The clanrats who ran along the inner side of the Library of Blood charge the orc archers and get bogged down in combat thanks to the unusually stiff morale of the orcs.

The Abomination is gunned down by orc artillery, and an attempted combined charge by the Skaven Warlord's unit and the slaves along side him fails, as the sluggish slaves have no thirst for combat. The general's escort goes in alone but wades through the orcs, routes them and chases them down. The plague monks begin their slow wheel and redeployment in search of a decent opponent.

Closer to the center, the rat ogres learn the danger of massed goblin archery combined with poisoned attacks. One lone, injured r'ogre is all that remains.

A lucky Scorch spell nearly annihilates the squig unit, which an unlucky attempt at firing leads to the second misfire in row and the WLC explodes.

A unit of Skaven gutter runners (and an assassin) sneaks on to the table alongside the giant, but are hit by a fanatic, suffer two casualties and decide they've had enough, fleeing off the table. One of the fanatics initially heads towards the open space beside the Seer's unit (behind a fence) but then heads back to the injured giant and takes him down. 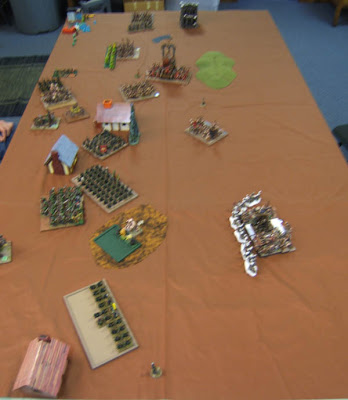 The Skaven Warlord's unit weathers the attack of several goblin fanatics and finds itself between the night goblins and the goblin hero riding a gigantic spider.

The bell continues to shamble aimlessly.

In a "contest of the abused" the lone r'ogre charges into the Quicksand and fights it out with the remaining squigs & handlers. He breaks and pursues, but is perforated by a hail of goblin arrows the following turn. 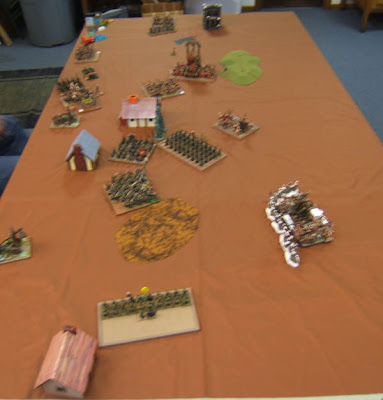 Towards the end of the game...

The Skaven Warlord deals first with the spider hero, then with the night goblins. The clanrats in the distance finally finished off the orc archers and then turn on the bolter. The slaves, seeing that the fighting is almost done, finally get themselves into combat and swarm the catapult.

In the center, the night goblins begin retreating as the BSB, clanrats and plague monks continue to advance. At some point the second unit of gutter runners appears next to one of the catapults, but is shot up by the the gobbo archers along the flank. The gutter runners again panick right off the table, but then the gobbos themselves are sent running after sustaining heavy casualties from magic.


In the end, it looked like a decent victory for the Skaven. The "big stuff" didn't have much affect. The monks & furnace, Abom and r'ogres were more or less kept out of combat. The clanrats and warlord did all the work, along with unusually successful support from the Seer's magic. Most of the Skaven casualties were caused by artillery fire, fanatics and a couple good rounds of volley fire by 40 gobbos. Just like the big Skaven threats mostly stayed away from combat, the Orc general & his big unit of orcs, the giant and the squigs all never saw any real combat either.

Another good game. I do have to admit that I am getting past some of my dislike for the 8th edition rules. It still makes for some frustrating and stupid things happening in game, but I think I've achieved some sort of almost Zen like state of denial. I am also enjoying these bigger games of WFB (3000 points) even more than the smaller games, too.

Posted by ZeroTwentythree at 12:14 AM