This weekend was the 25th Game Day hosted by Ron, one of the members of my ol' gaming group.


We played three rounds of games. The first round was one of my favorites (in spite of never doing very well at the game,) Blue Max using the Canvas Eagles rules and 1/72nd planes, hosted by Rich. I piloted the Albatross D.V in the center of the third photo. This was the only game I've seen in which every single plane survived the game. In fact, this was a rare battle in which I survived. We did have a record number of potential collisions, though -- but not a single one happened!

As with every game of BM/CE, I came home and dug out the three plane kits I bought years ago but still haven't built. I think I may go with a magnetic Omni-Stand and hide some chunk of metal inside each plane. (For the curious I have an Albatross D.V, a Fokker DR.1, and a Sopwith Pup, all Airfix.) 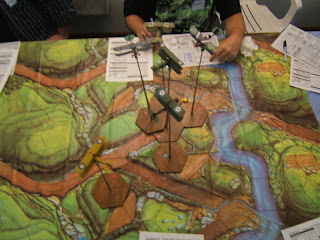 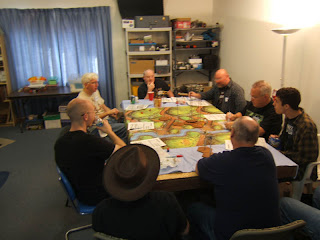 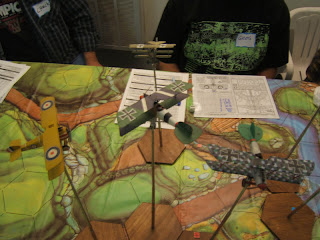 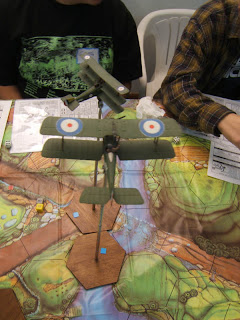 The second round had games running. One was a multi-player Hordes of the Things hosted by Sam. I fought on the side of Tarzan and his mostly animal minions, losing horribly to an alliance of Conan and Jason and the Argonauts.

In a second game I played a one-on-one against on of the new HotT players and did a little better, using the Conan army against Jason. But then, how can you go wrong with Conan. :) 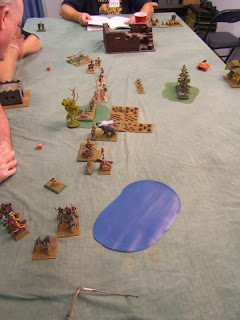 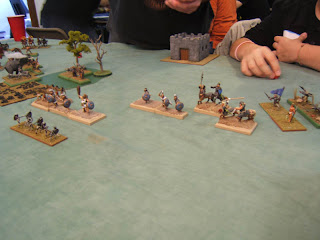 At the same time the Things were Hording, Ron was running a Killzone game on another table. I don't know the details but it seemed to be something like a cross between Killzone, Toon and the movie The Running Man. There were various anthropomorphic gangs (rabbit gang, frog gang, etc. all with shotguns, pistols, etc.) competing in a futuristic televised gladiatorial type competition. 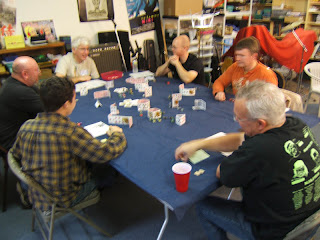 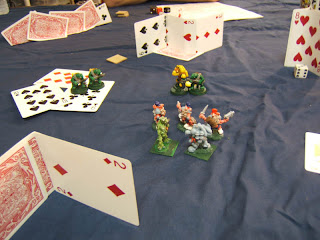 And in the third round, two more games were going on. I ran a modified Warhammer Fantasy Battle game in which barbarian refugees from the north are denied asylum in the Empire so, hungry and homeless, they descend on the village of Hintersdorf. The game ended up closer that I thought it would be, thanks to my realizing that units defending buildings are steadfast after we had started playing. That helped the Empire hang on and defend themselves better than I had thought they would.

Next time I change that rule.

Still, the barbarians did make off with a bit of the livestock, a few villagers for ransom or slaves, and a few of the buildings were burned down. But I call it a minor Empire victory. They took minimal casualties, half the town was intact, they still had some of the livestock and most of the villagers. 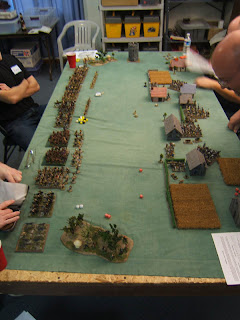 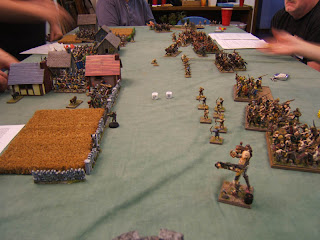 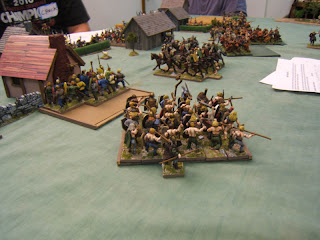 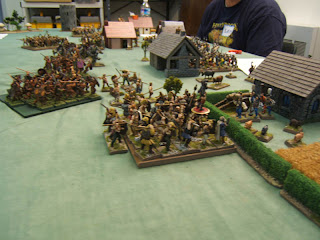 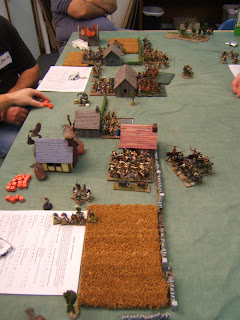 A late fourth round was also scheduled, but everything was running a bit late so we passed on the last scheduled round which was going to be me running Betrayal at the House on the Hill, pick-up card games, and possibly Ron running Space Hulk.

Once again, a fun time was had by me, and hopefully everyone else as well.

Posted by ZeroTwentythree at 12:47 AM