This is the third year (of the four years of its existence) that I've participated in the Warhammer-Empire.com "Pleasant Surprises" which is a mystery figure exchange organized by one of the dedicated forum members.

Two years ago, my "target" was forum member CannonofDoom. After a bit of snooping, I found a photo of him and learned that he was an artillery man in the military. So I converted an engineer/crew to look like him (to the best of my abilities.) 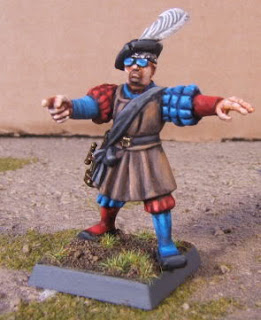 So this year I drew his name again in the random shuffle. Doing a little more snooping, I found a photo of his family, so I decided to add a converted figure to represent his son as an "artillery apprentice." I used the Hasslefree Miniatures "Albert" for this, with just a few minor alterations. I thought the helmet would look close to a sallet with the crest removed, and I swapped out the morning star and repositioned the arm so that it was holding a cannon "swab"(whatever they're called) made of brass rod & greenstuff.

Both are painted & based to match his Empire army.


This year I received a mercenary ogre from Claus79: 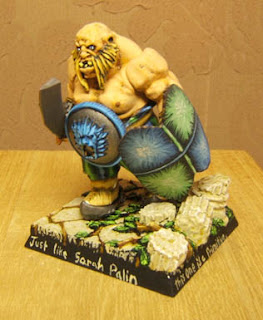 Posted by ZeroTwentythree at 10:32 PM