Had a #000000 Friday mini game day. Well, very mini, just four of us and it the games only lasted a few hours.

First up was our first trial game of Hail Caesar. Metellus Pius and his Romans on the left, Lucius Hirtuleius with a mixed force of Spanish, Celtiberians and a pair of Roman legions. It was a small game with two commands on each side. 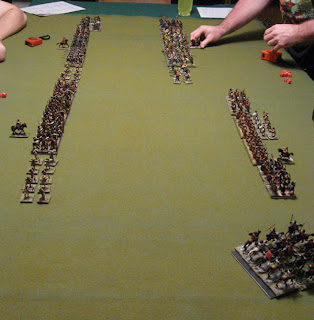 On the far end of the battlefield, the Celtiberians broke, but not after wearing down the Romans including the one unit of veterans. On the near side, the Roman led Spanish smashed through the Metellus' nameless (and incompetent) subcommander's division.

The Sertorian faction stays in control of Spain... for the moment.

There were a few bumps in learning the new rules, but we still finished in less than 2 hours. Overall, I liked the rules. I'd like to see some larger games, especially after getting to know the rules a little better. Overall, though, I like Hail Caesar so far. Not sure if I'm as instantly fond of the rules as I was with Black Powder, though. 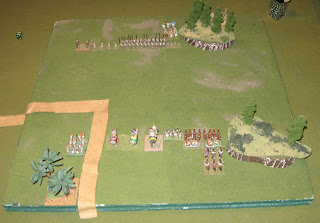 Next up was a bit of experimental DBA, Alexander v. Porus. The brown strip was actually a (muddy?) river, which turned out a bit difficult to cross. The Indians won a cheap victory by raiding the Macedonian camp and taking down Alexander.

I also got to pick up the loot I had a friend pick up for me at Fall In: "Last Argument of Kings," some landsknecht casualties from Artizan (they were out of the looters) and a 1/72 Esci SE5a. I also took the copy of "Trench Wars" that he didn't sell at the flea market off his hands.

Posted by ZeroTwentythree at 8:54 PM