After exploring the Oldhammer forum a bit more this week, I've started thinking about the idea of "remote gaming" as an alternative or supplement to solo gaming.

The concept would be that I would set up the battlefield, the figures, etc. and would play against a remote opponent by keeping a blog with updated photos of the table, use an online random number generator to get dice results, and would get instructions from my opponent that I would carry out on their behalf. This got me reconsidering Hail Caesar as the basis for a fantasy game, since the movement is somewhat loose, based on a verbal description, and partially dependent on dice. There would be little change from playing an in-person opponent other than me moving their figures for them.

So now I'm considering digging up an opponent and giving that a try.


I like to include at least one photo with each entry, so here's a pic of two older figures I finally based. The figure from the Confrontation range is quite a bit bigger, even when taking into account the larger base. But between that and his proportions, I think he might make a good partner for the old GW "Death Elemental" that I will be painting up sometime (hopefully) soon. 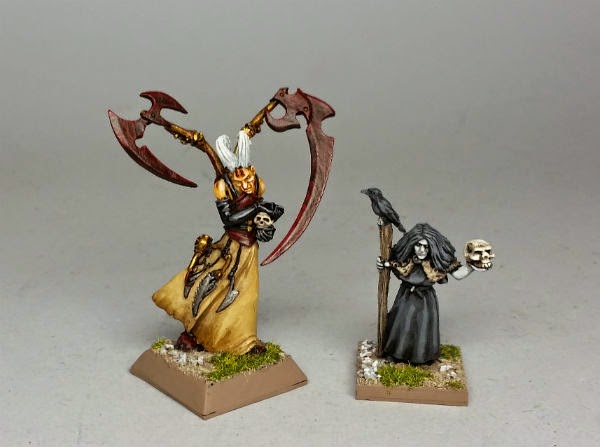 Posted by ZeroTwentythree at 1:12 AM