I tried a base coat, wash, and then some dry-ish brushing, and this is about the best I've come up with for a very light color on my paved/cobbled road.

I'm not entirely sold. But it doesn't exactly look bad, either.

The cork is so tightly compressed, it's hard to get the joints to show up on the top surface when painting. The nice thing about this stuff was that the chunks of cork were large, so I was hoping it would read as large stone.

I'm also wondering if it would look better put onto a thin base, with the earth banked up at least half way (probably more) the sides of the road.

To be honest, I'm not certain the addition of the cobblestone matt on top of this would improve it for me. I suppose there's no way to know without just doing it, but I'm really thinking about returning it as an unnecessary added expense at this time. 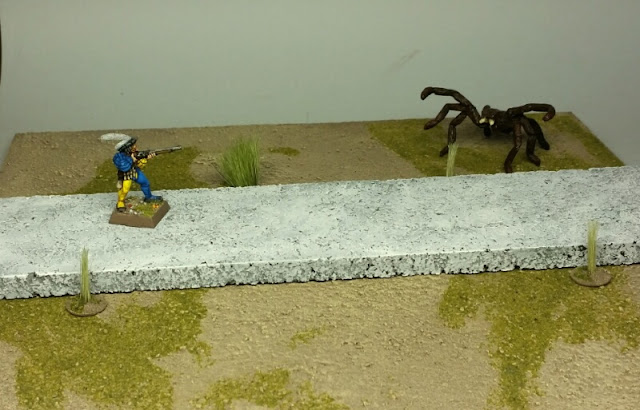 As a little background, The Wasteland is the hinterland of city of Marienburg. My campaign is planned to center on the western half of this area, including the Bitter Moors, The Little Country, and the marshes closer to the city itself. Possible plans for action in Bretonnia -- in the Pale Sisters, Gap of Gisoreaux, and even into Forest of Arden.

A sloppy composite of several WFRP maps is below. I will be using this as a reference for an eventual hand drawn & colored map of my own. 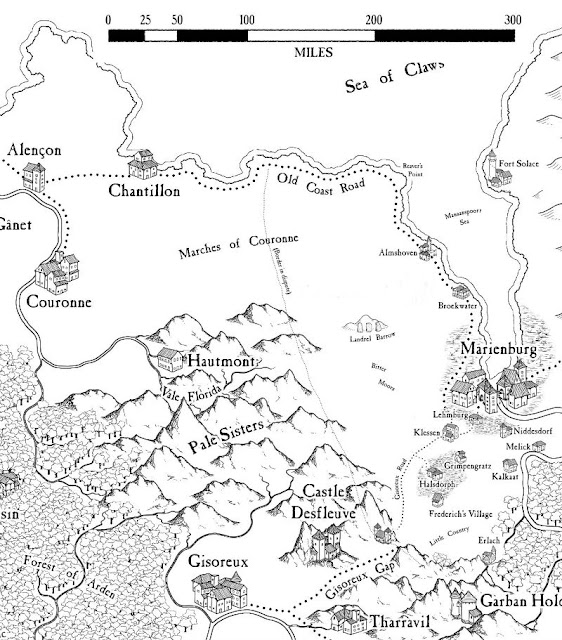 A brief background, as gathered from various sources and perhaps elaborated a bit, is that the area was once pleasant and green. In the time before men moved into the area, there were High Elf colonies here. The Old Coast Road is a remnant from that time -- and old raised road of close-fitting white stone. The Elves got into some sort of tiff with the Dwarfs over shaving or some such foolishness, and eventually left. In their absence, Fimir and Skaven eventually moved in, battled it out a bit, and broke & poisoned the land so badly that it became a no-man/elf/rat/demonswampgoon's-land. But men did eventually settle where they could. The city of Marienburg is most populous, but smaller settlements can be found, especially in The Little Country, to the south.

So there you have it. Creepy moors & marshes between the mountains, the sea and the River Reik. Ruins of several diverse ancient civilizations -- Elf, Fimir, and Skaven. I like the idea of the old (*cough*cough* "Roman") roads, and have decided there are more than just the Old Coast Road in the area. Currently there are a number of active players in the area -- Marienburg, the Empire, Bretonnia, and in the mountains are Goblins, Dwarfs, and Skaven. There is an Elf enclave in the city of Marienburg, as well as mercenaries attracted from abroad. Perhaps more ancient & twisted things lurking about the foul fens and moors...


Well... I went a long way to explain a piece of terrain. But that's where I'm coming from with all of this, and where the raised, white stone road(s) fit into it.