I've been thinking, and have previously written elsewhere, about building some raised, paved roads.

My initial thoughts have been to do something vaguely Roman-like. I've considered a few ways to do it, but the thing I'm hung up on is the base. I know I want to use MDF/hardboard because it's sturdy and is very resistant to warping in all of my other terrain projects. But it also requires power tools and makes an awful mess, both of which create a problem, as I do all of my hobby work in the carpeted attic above the bedrooms (very) late at night.

After reading a recent blog entry at Oldhammer on a Budget, I went looking for the roads in question. I found them at Michael's Craft store, though they come in a pack of one brick and one cobblestone and I only wanted one or the other. So I opted for a large (18" x 36"!) sheet of the cobblestone stuff instead. It was on sale, and cost just over the price of just three smaller pre-cut road sections.

While I was there, I also spied some chunky cork tiles that I thought I could find a use for. They are 12" x 12" x 5/8". My first thought is to just paint the cork and see if it has a suitably stone-paving look to it. Alternately, I may be able to use it as an alternative to the MDF/hardboard if it resists warping. I will just need to be more careful about chips & dents. So with that in mind, if painting it directly doesn't look good, then I can try mounting the cobblestone stuff on it. 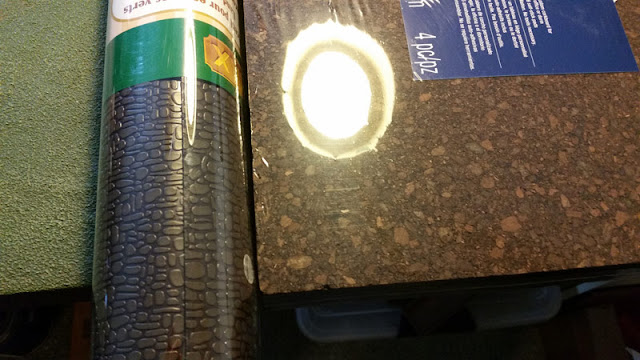 I'll follow up with some paint tests if/when I can get some time. Everything seems to be conspiring against me getting any painting done lately.

Posted by ZeroTwentythree at 4:35 PM