I figure my desire to make a big push on painting up half-orcs will coincide with "Orctober" so I cleaned & primed the next unit, plus the old standard bearer I stripped. I'll also prep the Hobgoblin Despoilers, er, ahem, old Citadel "half-orcs" next, and then I should be set for some painting next month. 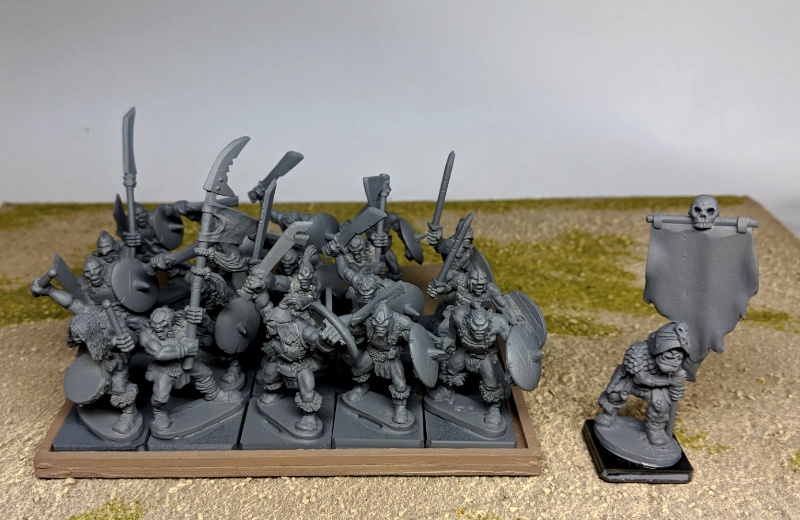 I think I mentioned in a previous post that I will end up with right around 1000 pts of half-orcs based on WFB3. This has got me thinking about other mini-projects. I've already been doing a few individual mercenary units, but I like the idea of these small 1k forces as well. It give me a nice variety to paint and could be fun if I start gaming again.

So I've already been thinking about getting in on the next Old World Army Challenge, which involves painting a 1k force over 6 months. I've got two potential options for that. One are some old wood elves, half of which are painted but I've been wanting to strip & repaint. The other are Sea Elf allies I've long planned for the Marienburgers. These are all unpainted or in need of stripping from previous owners (well, except for one test cavalry), the bulk of which are old 4th ed. plastics I picked up on the cheap many years ago. 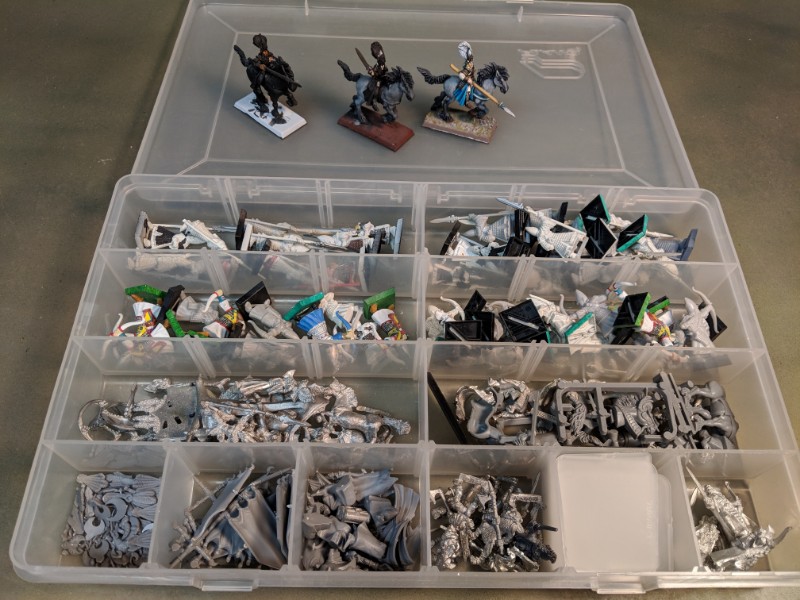 Thinking about further 1k projects, I've got a couple of ideas. I have some of the old Tom Meier lizardmen/trogs that I stripped of their 1980s paint years ago, but just haven't got around to repainting more than a single figure. I've got a small unit of each, but now that they're available again from IWM, that could be a fun 1k project. It wouldn't necessarily fit into my Wasteland campaign ideas/theme, but I can totally rationalize after recently re-reading some of the Warhammer background... Marienburg and the Sea Elves are both involved in trade from the New World, so how about plans for some small games/skirmishes there? I've never been crazy about the Slann, so I can just go full lizard for my own use. Of course, that gets me thinking about more ideas... what else could I justify in the New World? Since I'm skipping the Slann, how about some fantasy Aztecs? Something else...?

On the other hand, I'm still trying to restrain myself on starting any new (or New World?) projects until I've caught up more on what I've already got -- like the Marienburgers, undead & undeadish, and especially the halflings/JTC.


Posted by ZeroTwentythree at 1:42 AM