This weekend a friend from the local game store hosted his summer "cheesefest," which is a full day of gaming and grilling. Other than a brief rain shower, the weather was mild and pleasant. We stayed dry and in the shade thanks to a large tent/canopy in the yard. There were three 4x6 tables for WFB, and later on we played some Betrayal At the House on the Hill.

I got one game of WFB in, with my Marienburgers facing off against a saurus based Lizardmen army with a single Engine of the Gods. I was hosed in the "beginning of the turn" phase of my first turn, when two Comets of Cassandora went off, killing both of my mages, one archer detachment and one cannon plus crew. So that put me somewhere around 500 points down before I moved my first figure. It went downhill from there.

"Betrayal" on the other hand was a blast. It's been a very long time since I've played any boardgames, but I think my interest has been renewed. Sadly, this particular one is no longer available. So I will be looking for something similar, to maybe have an occassional Game Night at my place. (An idea I've been talking about for months, anyway.) 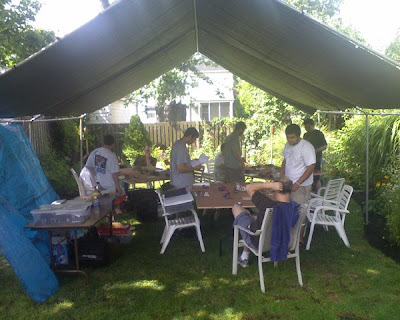 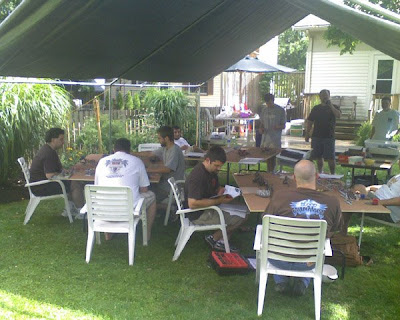 Posted by ZeroTwentythree at 10:39 AM