This year's Historicon ranks among the most fun I've been to. I kept pretty busy the entire time, pushed a lot of figures, rolled a lot of dice, painted a few figures, and had a lot of laughs. Hell, I even "enjoyed" playing Magic back at the room, and I normally hate that game.

I'll probably be posting some specific stuff regarding a few events later in the week, like the WAB doubles and medievals tournament, the Clash of Iron demo, and the painting events.

This year I also came home with several times as much loot as I normally do. The best part is that almost all of it was at bargain prices. I just couldn't pass it up! Jus for humor's sake (and to give an idea what I'll be painting over the next year,) here's a list:

I wasn't certain there was going to be room in the car for me on the trip home.

Sadly, with all the new stuff I got, I also lost my straw cowboy hat. I was quite fond of it. I brought it to keep the sun off my head, but I never wore it and left it at the hotel Sunday.

At any rate, I have plenty to keep me busy for quite some time, though I will be returning to some commission work for the next few weeks. I fell a bit behind trying to finish my stuff for the WAB tournament this past weekend. So now I owe some time to some other figures on my painting desk.

My photography skills left me, this time around. Not that I took many pics. But here's a few: 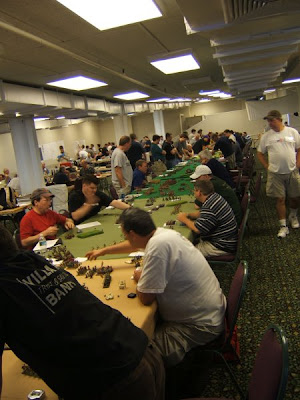 WAB Medievals in front, WECW to the left, WAB Classical & Open in the distance: 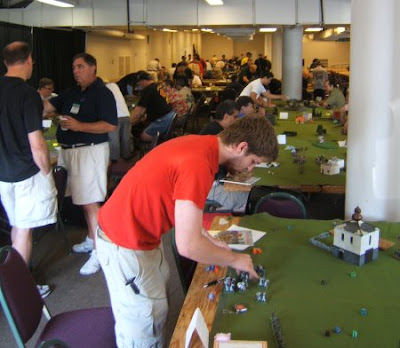 Ancients area (is that the El Cid games in the foreground?): 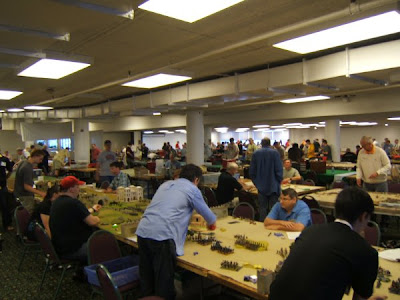 Posted by ZeroTwentythree at 1:16 PM