Although I've been going to Historicon (and Cold Wars and the occasional Fall In) on and off for a long time, I've only recently started participating in the painting events in the past few years. I think they are really unappreciated events on several levels. One, they are a lot of fun. Two, they are helpful in promoting & improving the visual aspect of the hobby. Three, the people running them seem to put a whole lot of work into them. Four, the events seem to be marginalized to less-traveled locations at the Host (I've had people tell me they didn't even know there were painting events going on.)

At any rate, I participated in three events this time: the bring-in painting contest, one of the 1-hour speed painting events, and the Iron Paintbrush.

For the bring-in contest, I entered my Gallic standard bearer (almost-finished pics posted last week) in the single figure catagory (25mm scale, "master" level), and a unit of 40k terminators in the unit catagory, at the same scale and skill level. I felt a little guilty about the latter, as I'd like to enter historical figures since it's a historical convention. But they were something I had painted fairly well that I hadn't already entered in the contest before.

I ended up winning a silver for each. I'm not sure what I was up against since most of the entries were picked up when I got there. But the competition has been sparse. Hopefully more people will start entering... I will do my best to encourage people.

The figures I entered were things I had already painted for games. Next time I'd like to try taking my time & paining something specifically for a painting competition. We'll see if I get the time. :D

As far as other entries go, two of the few figures still there when I picked mine up caught my eye. The first was this guy (not my model!): 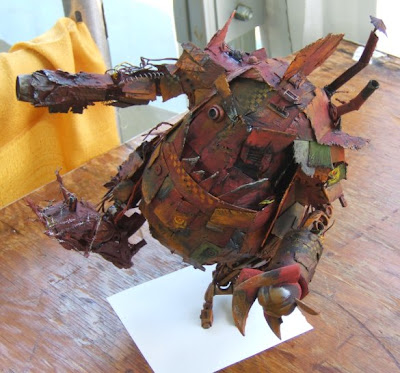 Appears to be a Mr. Potato Head 40k Ork Stompa, and truthfully looks better than the plastic kit GW just released. I love the cobbled-together details, and especially the precarious balance of the figure. Well done! I hope it won something.

The other figures (pics didn't come out) were the "Best of Show" winners, a group of 15mm WWII figures. Not normally my period or scale. But these things were painted better than many larger scale figures I see, right down to little details like insignia, and even details in the terain including a beautiful map on a fallen log. The map couldn't have been any larger than 1/4" square, if even that. "Best of Show" was well deserved.

I had some free time Friday night, and thought this would be a fun way to wind down the evening. I prodded my two Iron Paintbrush team mates and our "consigliere" into coming along. We were all given an identical figure and an hour to complete them. One difficulty is that I have become very familiar with all of my paints at home. But at the paint tent, I had to search around for colors. But that's a good thing... get out of the comfort zone and all that.

So the three of us spent the next hour painting, nudging each others elbows and taunting each other. In the end, we turned out three pretty good looking figures. In fact, there were a number of really nice paintjobs. 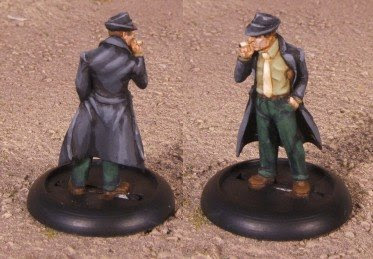 
This event was one of the highlights of last year's Historicon, for me. I had a load of fun and our team won the Silver. This year one of our team couldn't make it as he has recently become a father. Fortunately, we know quite a few talented painters.

This year things were a little less enthusiastic, and the event actually got disrupted. The reason, apparently, was due to the showing of the "Sharpe" film, which someone evidently decided should be shown in the painting tent. We actually had our table picked up and moved by hotel staff in the middle of the event. The painting people seemed a bit down about the whole thing, and explained that this was also the reason we didn't have music this year (which helped set the mood last year!) since they took the power for the projector.

So to cut to the chase, we won the Bronze. A step down? Well, I guess so. However, take into account that I told everyone the wrong time, so we showed up a half hour late. Not only that, but I stopped in the hall to talk to Tony from Wargames Facotory while my team mates were getting our stuff together. We had a little more time this year, thank goodness. But that was largely blown by the fact that we screwed around for half the event. I don't think I laughed so hard all weekend -- at one point I just put my paintbrush and figure down because I couldn't paint with all the laughing. Top all that off with a theme/concept that, as one of my team mates explained, the judges didn't understand. I would have enjoyed the event having won nothing, so I'm more than happy with the Bronze.

One difference this year is two of us swapped figures back and forth, each painting different bits of the same figures. Last year we each painted our own. The third man did the terrain, as he did last year, and it even got some good comments from one of the judges.

At any rate, here's our entry, entitled, "New From the Discovery Channel, Jim, Bush Violator." The "theme" had to be "catch me if you can" and involve snow, tartan, and the color purple. So the concept is that Jim, the guy with the gun and wearing nothing but a (tartan) diaper and boots just got caught, uh... "writing his name in the snow" (you know what I'm talking about) next to the bushes outside the local, uh, naked necromancer elf's house and she has summoned up her undead minions to seek revenge.... Get it? :) Go ahead, click the photos to enlarge and read his name. 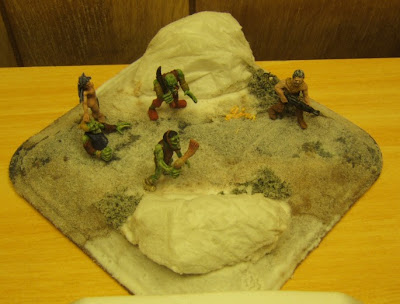 The pics were taken back at the hotel room, and I didn't correct color for the lighting. So cut us some slack. ;)

Posted by ZeroTwentythree at 8:09 PM