In the WAB singles tournament I decided to stick with the medieval division again, even though it meant bringing two armies. I really liked the scenarios and my fellow med-heads last year. I also find the medieval armies to be a good group of lists to play against each other. My Burgundians, in particular, are a fairly flexible list -- not specializing in one thing or another, but adapting depending on the strengths of their opponents.

So on with the reports. As with the doubles, I was so involved with playing that I didn't take many photos. Those that I did take are blurred due to repeatedly rotating the dial on the camera as I took it out of its case...

The scenario involved 1500 point lists. The objective was to capture and hold a town/crossroads. Both armies were gradually fed onto the table, one unit at a time, with the marching order being determined before hand. 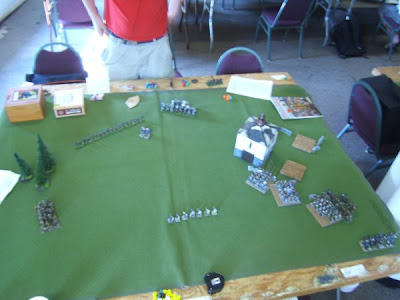 The objective is the cluster of buildings, walls & fields on the right. I ended up deploying everything there and only leaving a stalling force in the center. As the deployment developed, I kept waiting for the usual Teutonic Uber-Knight unit... that's what's deployed in the center, top. To the left is a unit of crossbow. In front of them are my Burgundian coustilliers. They spent the previous turn chasing off some skirmishers, but then fled when the knights showed up.

On my side of the table, I've got some skirmishers in the center, everything else (mainly archers and pike, but also some gendarmes) are huddling around the objective, avoiding the crossbow, and chasing off a large-ish unit of turcopolen cav. 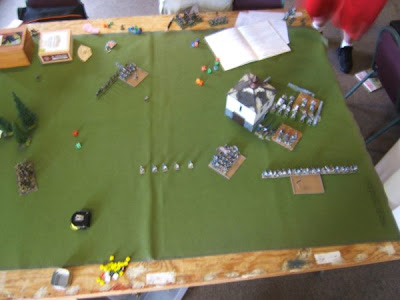 Towards the end of the game my pike have charged the crossbow (and defeat them after the pic.) Everyone else has huddled around the objective, avoiding actual combat with the knights. I managed to kill off everything else in the Teutonic army, so won by whittling down the army to its break point while avoiding their most potent combat unit, and denying them sole possession of the objective.

The game could have been a diasaster, but I was happy I handled it the way I did.

Condotta games are fun because they are similar enough to the Burgundians, but have a few more options. They usually seem to end up being another "combined arms" army and are always good for an interesting battle. 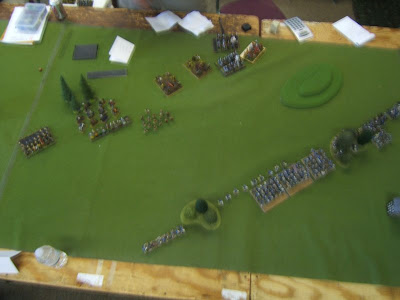 This battle used 2000 point lists, and a diagonal deployment. Armies deployed in a typically medieval set of three "battles" that we had to write out ahead of deployment.

My Italian opponent is at the top of the pic. From lower left to upper right, he had, if I remember correctly, some pike, Stradiots behind crossbowmen, some skitmishers, two cannons, and towards the top was clustered some heavy infantry with halberds and plate armour, mercenary knights and feudal knights.

I deployed, from left to right, crossbowmen, skirmishing bowmen in front of two large units of bow and a unit of pike, then towards the upper right are handgunners, dismounted gendarmes, mounted gendarmes and coustilliers. 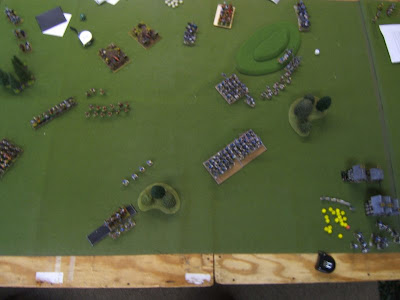 The bulk of the battle was decided on the wings. On the lower left, the stradiots charged the Burgundian crossbow, who were then supported by the skirmishing bowment, in what turned otu to be a grinding combat for the entire game. Considering the deployment and the proximity of the Italian pike (who never made it to combat) I was OK with this trade-off.

In the upper right, I managed to move myself into a good position, ran down both units of knights and the halberdiers, and eventually crashed into the two artillery pieces. In the center, the remaining Burgundians (representing a bulk of their infantry) all wheeled to face the remaining Italians, and finsihed them off, except for the pikemen in the distance.

At this point I was at the peak of my confidence, having won two games by hitting my opponents break points while managing to keep my own casualties to a minimum. This was actually new territory for me. ;)


I was dreading this game. I have a fine appreciation for the Low Countries army, and have been planning one of my own. Last year I suffered a horrible defeat in Game 2 against the same opponent, both of us using similar armies. I was hoping the grudge match would turn out a bit more in my favor.

My assets were that I had a series of really shitty dice rolls last year, and that I also had learned some lessons about how to face the Low Countries army after the first defeat.

So this game the tactics were clear to me: charge across the battlefield and hope that I could weather the missile fire, hit them hard enough, and then hit them a second time to break through that Stubborn rule. 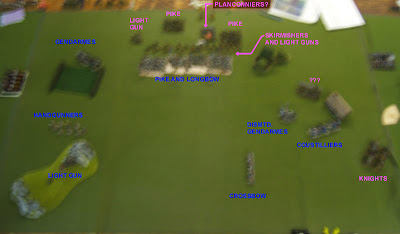 On the far left this worked out well for me. I chased off the enemy cavalry, allowing my gendarmes to bust through the difficult terrain and threaten one of his light guns (on the flank of his central pike units) and eventually overrun into the pike themsleves.

On the Burgundian right, thigs were a bit more... troubled. My plan was to just tie up his cavalry and hope for the best in the center. I did this by falling back with my coustilliers, and bogging him down with dismounted gendarmes. My crossbowmen in the backfield, as well as my solitary light gun, also managed to scare off some of his cavalry at a key moment.

In the center, I hit him and we got bogged down. The decisive factor, however, was my flanking gendarmes. This caused him to collapse, and when combined with the lost cavalry on the left, plus overruning all his artillery and skirmishers, I managed to pull off a victory.


This was the first time I won a WAB tournament/division in many years. Only the second time at all. Considering this, I'm feeling like I should momentarily "retire" the Burgundians from the NEWS WAB tournaments. So I'm considering other lists. Low Countries are a the top of my options. I may just try running a completely different Burgundian list instead. Who knows. I've got until Cold Wars to decide. :D