A WIP photo of a project I've been (very) slowly working on for my WFB Marienburg army... 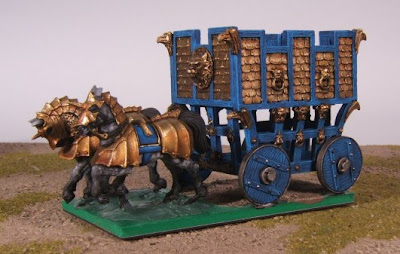 Initially it will be used as a War Altar for my "High Priest of Manann" (aka Arch Lector from the Empire book.) But my plan is to make an "insert" that slides in the top, containing a floor to which will be glued the High Priest as well as any other ornaments of office (statuary, candles, banners, whatever) I decide upon. But as it will be removable, I plan on have a couple more slide-in inserts.

The second will likely contain a cannon that will be aimed out the front, a crewman, an an armoured roof -- thus it can serve as a bit of a second rank steam tank. (Or non-steam tank.)

A third option will be another insert with a floor to which I will glue the original crewmen that came with the war-wagon.

For now I will just pop a "high priest" model on a separate base in there.

Posted by ZeroTwentythree at 7:22 PM