First some comments on a local game. This afternoon I played 2k Burgundians vs. Swiss. As usual, it ended badly for the Burgundians. I need to rethink my tactics. I've been hugging my own table edge for the main line, while trying to shoot the Swiss to pieces, as well as whittling them down with some of the support troops. But I just can't seem to do enough damage to them before the pike & halberd hit my line. Also, since I keep my own line tight, I seem to get caught in this giant, single battle with a single combat result, as the units don't line up 1 vs. 1.

So next time... less shooting, more agressive movement? MORE shooting? Not certain. I'm curious to either take a Low Countries army for a test drive, or maybe just change the composition of the Burgundians. My opponent suggested interspersing some organ guns in my line to blast his face off as he approaches. (Kind of him to suggest the methos of his own demise.)

I've been too lazy to do much about battle reports from Historicon, and my photos are all blurry. (I kept knocking one of the dials on the camera out of place every time I pulled it out of its case.

But here we go with the WAB Doubles. I took a "Cimbric War" army, a mix of German and Gallic units, using the Gallic army list from Hanibal and the Punic Wars. I only use three units: Cavalry, Warband and skirmishers. No fanatics or chariots. I like the list better than the one in the rulebook, even for Germans. I disagree that Germans deserve the "stubborn" rule, and I've read enough of them moving through woods & rough terrain, ambushing, fleeing back through woods & rough terrain to think that the "stealth" rule is more appropriate as well (not that I really get to use it.) So on wih the reports:

Gauls & Warlord vs. Macedonians and Barbarians. 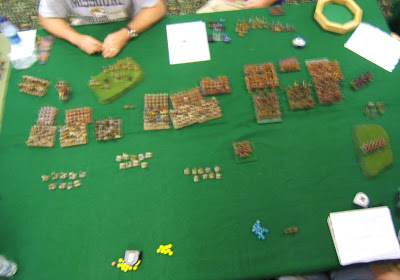 Here we join the game already in progress. I was more interested in playing than in photographing, so the camera didn't come out much.

My Gauls are on the lower left, my team mate's Warlord army (essentially more barbarians) were on the right. I was more or less facing off against Macedonians, with more Barbarians opposite the Warlord.

On the far left flank, the cavalry battle was already over. My cavalry overran some skirmishers and flattened out the Macedonian cavalry wedge. After a craptastic round of dice, the Companions held. The following turn they beat the Gallic cav and sent them running.

My skirmishers are all fleeing at this point, with the exception of one unit of javelinmen who bravely charged the enemy slingers in front of the hill, then followed up into the Macedonian artillery crew. (There were 3 ballistae on the hill.) This is also the moment of warband impact on the various phalanx units. Our armies stretched from table edge to table edge, so there wasn't much room for manuver. It was more like a blind charge forward and pray for the best. :/ 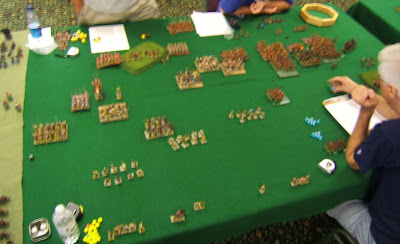 At this point it's fairly clear that we did not get the best. The initial contact actualy worked out OK. I actually sent at least half of the pikemen running. I just failed to catch them (except one unit, near the center?), they rallied and then beat me on the second charge. The elephant and companions mopped up what the pike couldn't catch.

Not as obvious to see in the pic (maybe after this) was that my partner at least managed to handle his side of the battlefield successfully. His two units of cavalry defeated the opposing cav. The two lines of barbarians met and the good guys won. The game ended in a draw, no thanks to the cramped and rash Gallic line.

Gauls and Warlord vs. Carthaginians and Greeks

This game seemed a bit roomier. Not necessarilly because we had more space, just that there were some openings across the table that we could exploit. 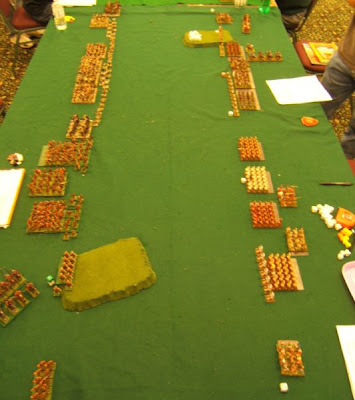 I faced off against a mixed Carthaginian (Africans) and Spanish line, with some skirmishers and Numidian cavalry mixed in at the top of the pic. My opponent faced a smallish Greek force, including some uber Spartans near the bottom of the pic. The Good Guys are on the left, the Bad Guys on the right.

Right about the middle of the table, there is a cap in the enemy line. Opposite that is a unit of my cavalry. This was important. 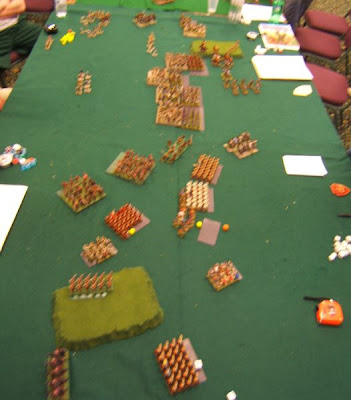 In this pic you can almost see (through the blur) that my cav have overrun (after rashly charging on a failed warband test) through some skirmishers and ended up behind enemy lines. In the distance, my other unit of cav also rolled poorly and rashly charged some ranked scutarii, bounced off but rallied. Barbarian warband followed up, beat the Spanish, and my two units then started to push the cowardly Numidian cavalry back behind the Carthaginian line, working around the hill. In the center, the Gauls didn't smash through on initial contact, which I thought was the end of me. But somehow I managed to stick around and start grinding down the Africans and remaining Spanish while my cav got behind them.

In the foreground my team mate fared much worse. Our fortunes were reversed from Game 1. The Spartans managed to get a combined charge with some flanking peltases against the largest warband (with the Warlord general) and sent them fleeing. They rallied, but the Warlord line was broken. I think one of the other warbands either panicked or was caught in the flank. After this, the Greeks just keep pushing back the Warlord army.

So in the end, I think we had another draw. If I remember correctly, we were something like 30 points +/- from actually pulling off a win.


So that was it for the WAB Doubles. A lot of fun. The Wall of Barbarian didn't do too bad, though in both games the phalanx rules really hurt us, especially combined with the lack of manuver space due to us filling the table with figures. Maybe next time I will try for a smaller army. Maybe Carthaginians -- even though I beat them, I liked the way the army performed. Maybe Romans. Depends what I feel like painting by Cold Wars.


Hopefully I will write something up about the WAB Medieval division soon...

Posted by ZeroTwentythree at 7:11 PM