I've had a small group of the old Tom Meier Lizardmen & Troglodytes forever. They were once painted by a simple black prime + green drybrush method in the early days of my painting & gaming. A few years ago I stripped them with the intention of repainting them simply because I love the figures. If I could get my hands on a pile more, I'd start a WFB Lizardman army just as an excuse to paint & use them.

I think I've got two of each, except one that got lost and one may be broken (both the smaller Lizardmen.)

I started painting one of the Trogs a long time ago. Just one. I just put a few finishing touches on him while waiting for a wash on some commission stuff to dry. A bit rushed, but I just wanted at least one painted before I die. I'll try taking my time with the next one. Eventually. Maybe next life. 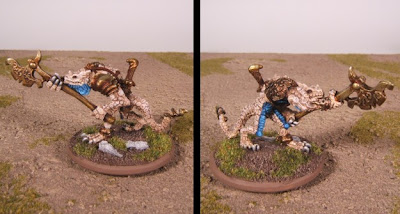 The color scheme was inspired by an assortment of agamid lizards with similar pale earthy color, but blue heads, necks and/or bellies.

Realistically, he and the base should be close in color. Well, realistically if he was an actual lizard in its natural environment. But I wanted him to stand out a bit, so I painted the base a bit darker than my normal method.