As previously mentioned, the price of admission to Grover's Grillin' Cheesefest was one painted figure for a mystery exchange. I painted Repanse. The figure I recieved was Grover's own "Putriss," one of the classic plaguebearers. 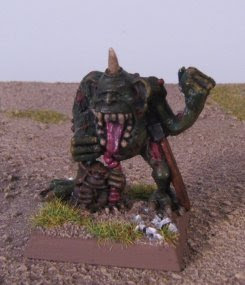 He left the base unfinished so we could match our own basing styles. The figure was particularly appropriate to me as I previously ran Nurgle themed 40k Death Guard, an oldschool Daemonic Legion (from the RoC books until the most recent,) and chaos Warbands. I also like these oldschool figure better than the newer ones -- they just seem to have a bit more character to them.