This weekend we fought out The Battle at Korebain Pass. We had an odd number of people, so the host and creator of the scenario & rules (Ron) sat out as a neutral GM. That left four players, each with 3000 points. Team Goats and Dogs (I just made that up) were Beastmen (Mark) and Dogs of War (Rich) on the bad guys side, while Team Desperate Alliance was Empire (Sam) and Skaven (me.)

The game used several scenario rules. I won't bother you with most of the technical details. I will just say there were modified reserve rules, a few pieces of mysterious terrain, and the major objectives for winning the scenario were possession of the Ogre keep (large semi-ruined block building in the distance) and to open/close a magic portal as appropriate for your team. The portal was near the DoW deployment area, where all of their "high command" parked themselves for most of the game, in a unit of pikes.

A view down the Desperate Alliance (TDA) battle line. Just look at those ranks upon ranks of verminous heroes. How can they possibly be stopped! In the background, Sam is giving Mark's beastmen the evil eye, "The Men Who Stare at Goats" style. 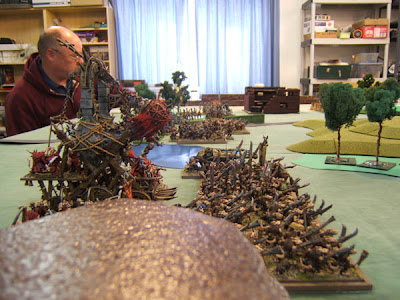 Another deployment shot down the line of Team Goats and Dogs (TGD.) The square tile (with a magic circle) nestled at the foot of the hill, in front of the DoW is the aforementioned portal. Sam's intimidation tactics are working, note the headless Mark, hiding in shame in the background. Or maybe he's just finishing deploying - I could be wrong. 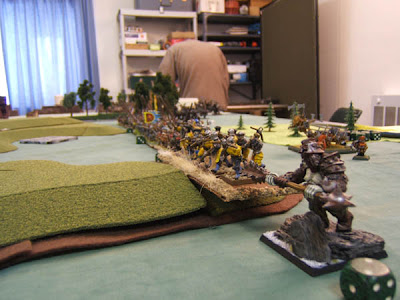 The view from atop the Screaming Bell, perch of the Wise and Powerful Grey Seer Kwiksplode. Dogs are more or less to the right of the woods, goats are to the left. 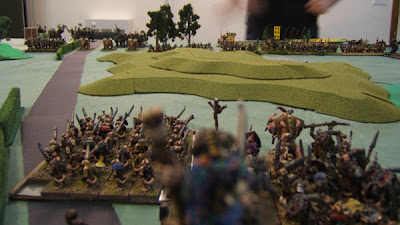 TGD moves first. The DoW babysit the portal, but the Beastmen are a little more aggressive, except than the gorgon (or however you spell it) hiding between the woods and the large hill. The DoW artillery park, consisting of three cannons, three hot-pots and a goblin hewer, form the second line. 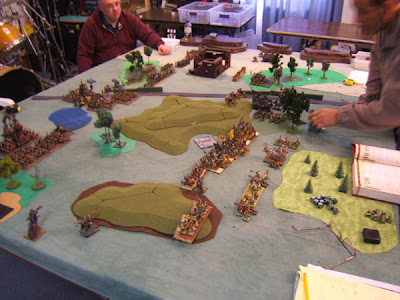 A view from high atop Mt. Corona, on the good guys (TDA) side. Imperial Greatswords move into the Ogre keep, easilly ejecting some sort of critter than had occupied it since its previous abandonment. It's difficult to see in the backgound, but the Screaming Bell is now Seer-less, as the Great and All Powerful Seer managed to get sucked into the netherworld, while blowing the heads off 2/3 of the unit escorting him. Centigors advance boldly into handgun fire in the foreground. 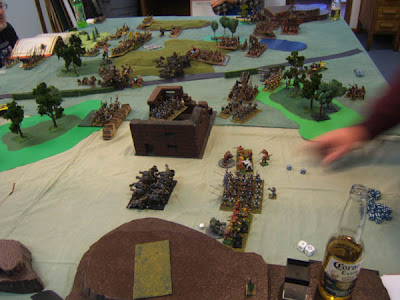 Slaves and clanrats (with a little help from a mob of Vermintide and a well placed warp lightning cannon shot) clear the woods in the foreground of a ogre maneater and another gorgon. Drong's slayer pirates advance to plug the gap between the woods and the hill in the foreground (actually, a burial mound.) Previously deployed DoW ambushers have been dealt with by the timely arrival of Skaven and Imperial reserves... 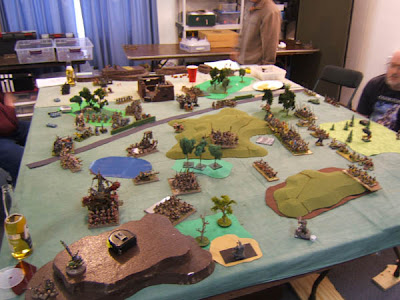 ...shown in this photo. The reserves include four rat ogres, a unit of knights let by a warrior priest, and a thoughtful and considerate hellpit abomination who has just saved the Imperial artillery park from being ambushed. The abom is truly a misunderstood species, not often known for its gentle kindness. 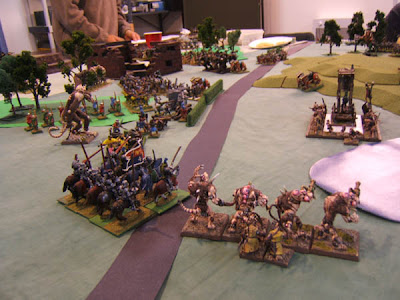 Note: What appear to be riderless juggernauts in these photos are actually razorgors, aka pumbas. One has smashed through some Empire handgunners and followed up into the artillery. Another has just been run over by the driver-less Screaming bell, which has its non existant eyes fixed on a third pumba alongside a group of minotaurs advancing up the center. Off in the distance a unit of clanrats and a unit of gutter runners emerge from caves in the cliff side, in the path of another unit of oncoming minotaurs. 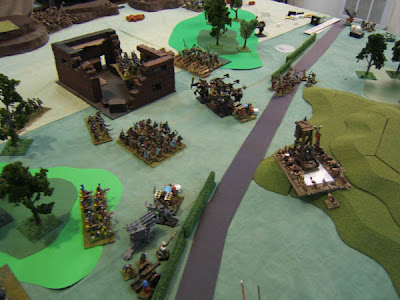 The minos in the center wheel sharply and attempt to wrest control of the keep from the greatswords. But the attack is fended off, which gives the Empire swordsmen a chance to charge them in the flank, while the clanrats attempt to deliver a Screaming Bell Suppository to the rear of the unit. And succeed. The minotaurs, including the hero leading the unit, die of discomfort and embarrassment. Knights attempt a rescue of the artillery from the rampaging pumba, while the Abom and rat ogres get in each others way. 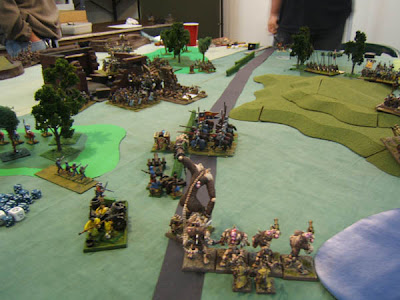 Around this point the action picked up. And/or I stopped taking photos. But in these last turns, the centigors have laid waste to the Empire's left flank. The Screaming Bell, now obviously out of tune since being removed from the wrong end of a group of minos, rings a peal of destruction and lays a bit of waste of its own, killing damn near everything in that central area around the keep (including the greatswords who had, until that point held onto it) and the road, going as far as doing significant damage to the pikemen & norse marauders on the hill. In the foreground, the plague monks and their furnace have not slowed down in running over over the slayer pirates and are about to turn the flank on the DoW line, with the help of clanrats and a bonebreaker mounted warlord pinning the line in the front. 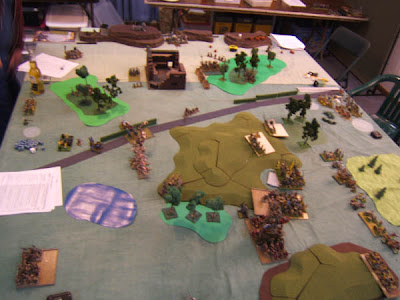 So that was where the battle was called. Both of the Team Desperate Alliance generals were dear, giving 3vp to Team Dogs & Goats. The centigors had captured some standards, but lost them when they were finally annihilated. The Skaven on the flank picked up two last minute standards, which I think was 2 VP for Team Desperate. The portal being closed (by the nearby warlord before he charged into combat) gave us a further 4VP, bringing our total to 6VP. After the Bell blew the greatswords out of the keep, it would most likely be occupied by Goats, giving them another 3VP for a total of 6VP as well.

So the game was more or less a draw, though after the devastation wrought by my f'ing Bell I think Team Desperate Alliance was suffering a bit. The poor coordination of the Skaven reserves (which were some heavy hitters) didn't help matters, though the infantry was at least rolling the flank if they could withstand the artillery shelling (hopefully by staying in combat, and thus not getting shot at in the first place!)

Posted by ZeroTwentythree at 11:39 PM