I've finished a unit of GW High Elf White Lions. Again, like the other new HE figures these are very nice. The two complaints I have are that they designed the joints between pieces to be at odd & visible spots (they came to me pre-assembled, so I've not seen all the bits), and they are a huge pain to rank up into a unit. In fact, there are only 16 of the 18 figures in the photo below, as I got sick of playing with them like a jigsaw puzzle. But in terms of sculpting, detail and proportion, I like these.

There's also an old metal mage in there, as well. 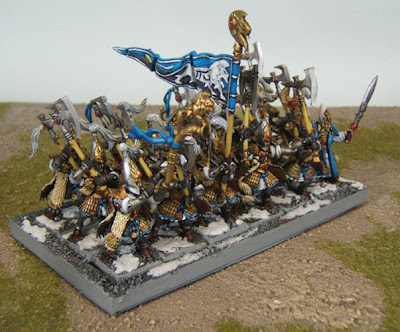 Almost done with the High Elves. Still looking for some big commissions, if anyone's interested.

One quick comment - or un-comment - on the recent storm surrounding Wargames Factory. There's a whole boatload of speculation, rumors, and judgment floating around the web regarding recent events. Out of respect for the company and the staff, I'm not going to add to the noise. I do hope that everything is sorted out to everyone's satisfaction soon, as I liked what they were producing, and was excited about where they were heading.

This weekend I'll be playing in a WFB Big Battle (for lack of better term.) As I understand it, there will be three 3000 point armies on each side, on a very large table. I've been wanting to try a large game like this for a while. I'm still not certain whether to use Empire or Skaven -- I'd better decide soon!

I wish I had a few more weeks to paint some more figures, as that could tilt the decision. I'm leaning towards Skaven, but would probably play Empire if I had time to paint a pile of halberdiers and maybe a lord on a griffin.

Posted by ZeroTwentythree at 3:28 PM