I've made some decisions.

I've decided to go with the heater shields on the Nightmare Legion. I filled & sanded the small holes on the face of them, and glued them to the figures. So here they are -- ready for some primer! I would like to put them on 40x40 bases like everything else in this project. Seems a bit heretical. I'll end having to trim the slotta tabs too. 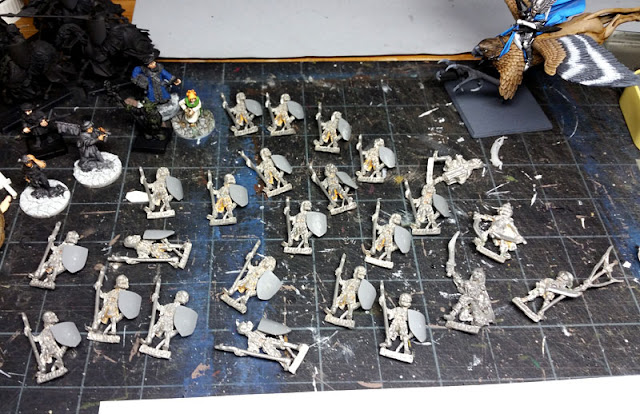 Another decision I made was to go back to the Warhammer setting for my (eventual...) narrative campaign. I'm still going to mix it up a bit. I think I will turn the clock back a bit from the early 26th century of the recent official stuff, to somewhere in the neighborhood of the mid 25th century. I may also deny that the Empire was reunited by that point. I will be scribbling out drafts for my own map, and jotting down notes specific to a local campaign plot & local setting. It will probably be in the western Wasteland (Merienburg's hinterland) between the mountains & border with Bretonnia and the city of Marienburg itself. That gives me mountains, plains, swamps, small villages, minor fortifications, trade routes, a mining town, etc.

So I guess this will be closer to Oldhammering it, after all!


Making these decisions will help steer me back on course, after starting to get sidetracked. If you're reading this, chances are you are a painter and/or gamer -- you know how it is, right? I'm still going to work in the other old figures I've dug out, and maybe try to work out some solo skirmish gaming. But I'm going to resist the urge to put painting, modeling, etc. work into those distractions. Even though I will be modifying it, since I will be sticking with an established setting, I will also minimize that distraction as well.

Now back to some painting...

Posted by ZeroTwentythree at 12:57 AM