More thoughts on giants. I'm not sure if I can make it yet, but I'd like to attend the Oldhammer in the New World event coming up soon and get a little bit of 3rd ed. on for the first time since I was young. I was thinking about what I could do... finish enough Fimir for a small list? Empire? With all of the time lost in our move, I don't think I can get the former ready in time, and for some reason I'm not feeling the call of 3rd ed. Empire at the moment.

I half-jokingly considered (and mentioned on the FB group) using a mercenary list for a full army... 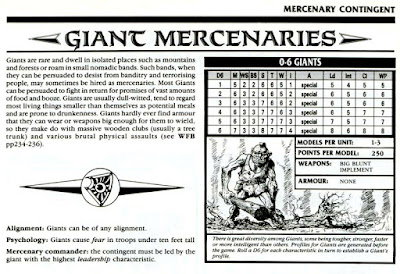 Not something that I, or probably most opponents, would want to see on the battlefield as a regular thing. But seems like it could be a fun diversion, and a few people enthusiastically mentioned they'd be willing to face off against an army of giants.

Considering the practical issues of using a bunch of giants, I thought it would be easiest to have a bunch of pre-rolled giants. That would avoid spending a lot of time rolling them all up before each game, and would also give me a chance to make some stat cards for both myself and any opponents.

Since I'm not quite set up for painting yet, and don't have a lot of time, I did take a bit of time to indulge in some prototype giant cards... 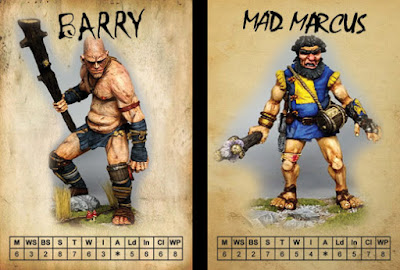 Stats were "rolled" up using dicelog.com. I'm still figuring out how to make the recorded logs public -- otherwise I would add a link here. What I will do is have one of these made for each giant, number them, and randomly roll up which giants are being used before each game. Unless they're all slated to rumble, of course. :)


A while ago I had started jotting down some ideas for a Giant Rumble game. All giants, no popcorn. So I'm thinking about revisiting this idea and may post some rules in future.

Posted by ZeroTwentythree at 10:34 AM