Somewhere on the Horizon


So far the new schedule isn't as bad as I had expected, in some ways. (But worse, in others.) So... sort of a wash, I guess? I'm still managing a little bit of time now and then for painting, etc. AND sleeping in an extra 15 minutes in the mornings.

So now my chief complaint (there's always got to be something, right?) is my desk. I've been trying to work around the tight work & storage space, but there are two remaining problems I need to work out. One is the inability to leave unfinished projects laying around. Coupled with the loss of a heat lamp for curing putty, this is kind of tricky and will become more problematic when I start working on some of the large vinyl toys (which I need to do ASAP.)

The second problem is the desk height. It's 28". I'm used to working at a drafting table that I kept at 36" high so I could sit upright. But after just a short time at the 28" desk my back is sore. Since have an armchair I sit on while working at the computer (and 28" is a decent height for that) I'm thinking about chopping down the legs to my painting stool. I'd hate to do it, because they're apparently not sold in the US anymore, and I'm still holding out a desperate hope for some sort of studio space again. The other option would be to build some sort of desktop "riser" for painting, etc. It would be doubleplusgood if I could work out something with some storage. I'm thinking maybe something like a box with a drawer. Maybe that could be the storage for works in progress? Or throw caution and thermal comfort to the wind and make it an epoxy oven? I'll keep working on my back hump for the time being, but I think I can work something out -- maybe even re-purpose something that's already built.

Enough of my rambling. On to some pictures. Y'all don't come here to "read the articles."

Two things. One is this: 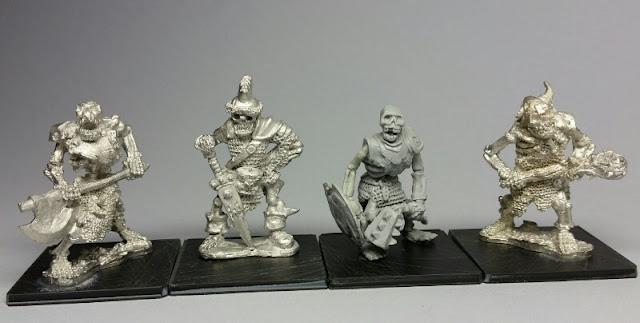 Yeah, a full unit (in my terms) of skeletal ogres. The two on the ends are from Ral Partha Europe, as I've already shared. The center-left is a familiar looking (minus his flesh.) If I understand correctly, this is the first full sculpt from Justin/Golden Age Miniatures. If that's the case, I can't wait to see what comes next! The resin figure center-right is "Slanga" from Krakon Games, the same place/sculptor as Morrighu, the Fomorian witch I posted a while ago. Another excellent sculpt. I can't wait to get started on this ragged crew. I've been looking forward to a unit of four for a long time. I had started trying to sculpt my own to go with the two RPE figures, but never got past two badly misshapen skulls. I'm grateful that Justin and Ross came along with similar ideas and did it right!


Next... I've decided that I'm going to find a way to get to the Oldhammer USA weekend no matter what. So, with that in mind, I wanted to bring a 1500 pt. WFB 3rd ed. army. As much as I would love to bring Fimir, there's no way I can have enough done in time. (But I've got my eyes on you, Oldhammer 2017!) All of my undead is multi-based, and really not built around the practicalities of WFB. So Marienburg seems to be the logical choice. Unfortunately, I find the Empire list in WFB3 to be among the least interesting.

But I eventually worked out (well, I'm 95% of the way there) a 1500 point army in character with the Marienburg theme. (Sadly, no pikemen at this time, though.) As long as I'm going Oldhammer, I may as well make my roster fit the look, too. They're not done yet, but this is the basic idea... 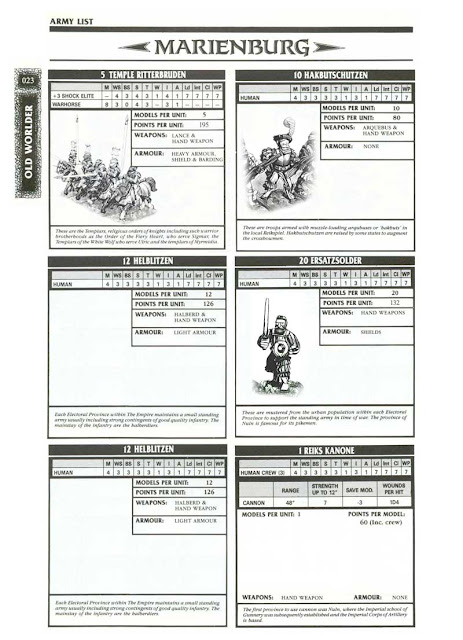 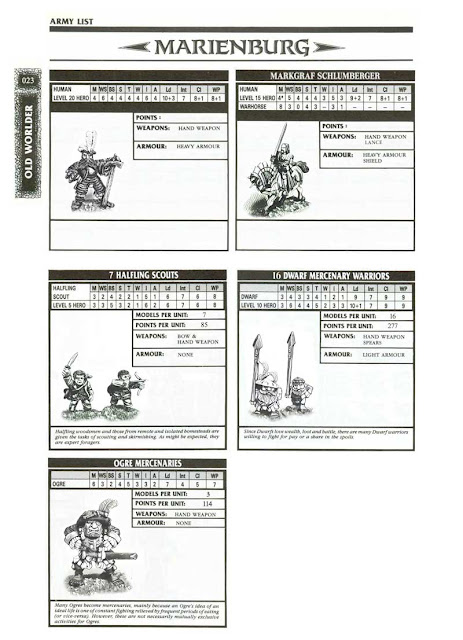 I still need to photograph a cannon & crew, tweak it, and add it to the entry. I'd like to re-shoot the knights & gunners too -- those were the first two I did and I prefer the more sparse look of the other entries, which are more in character (sort of) with the old Armies book.

The halberdiers ("Helblitzen") are still being painted. Yeah... all these years, I've never had any halberdiers. So I'm trying to speed paint some before the event. Always need to have some last minute pressure for every event, right? I was actually in the middle of painting some for someone else when the move happened, and I thought about racing to get those done. But I don't want to rush myself on someone else's figures. Luckilly, I did have some of my own assembled & primed.


So that's where things are headed.... quick halberdiers & skelogres, plus some minotaurs and Empire figures I owe two other people. And some antiquated 3rd ed. gaming!

Posted by ZeroTwentythree at 9:13 PM