On the way down to Marauders, dinner plans with friends on Friday night changed, so we had a little extra time. We still wanted to get TF out of Dodge Cleveland, so we made a little detour around Cowlumbus. I was wary of a SLACKER ambush, since this is in their territory, but we managed to avoid detection.

"The giant Corn! It's Concrete!"

"You don't know the giant concrete corn? I think it's in Dublin. Somewhere just off the highway. We'll take 270 around the outside of the city and go look for it."

We had a mission! The first order of business was coffee - we jumped off at the first Dublin exit we could find. It was mid-day and I've got a habit to maintain. We head along whateverstreetitwas and spy a Starbucks in the midst of heavy traffic and school crossing madness. A few minutes later and the SteamCelica was parked on a sidestreet and we were walking a few block back to coffee shop, me excitedly telling tales of wonderous Corn! as we went. As fate would have it, right around the corner from the Sarbucks was a Dublin visitors' bureau. The very first item in their wonderfiul world of Dublin brochure' list of "Attractions" was Corn! It also happened to be just down the same street we had parked on, and in the same direction.

So after a tedious 15 minutes or so waiting in line behind 50 caffiene crazed middle-schoolers (frightening... very frightening...) we hit the road again and finally found the glorious, glorious... 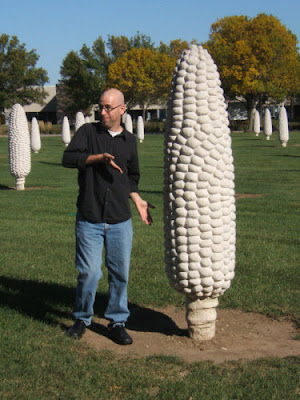 ...Corn! A whole field of it. And Osage orange trees throwing their fruit at us. (Seriously. Next time I bring a hard-hat.)

So that, it seems, is what passes for excitement in Cowlumbus Ohio, my friends.

Posted by ZeroTwentythree at 4:03 PM