This was a first for me. I've seen the Kislev stuff (which looks great, in my opinion) but hadn't actually faced it before. My opponent's army was close to a 50/50 split between Kislev & Empire. 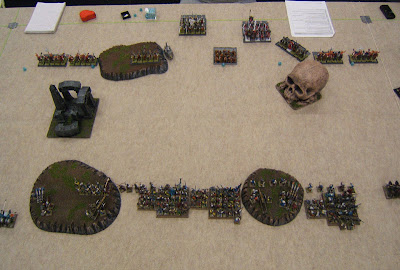 I played marshlands. His army was begging for marshlands, though, the effect of which was to slow all cavalry, monsters and steam tanks. My opponent played pitched battle, which limited the marshlands effects to the first two turns. My plan was to hold the center, stop the STank with cannons, punch through the left flank and distract/delay on the right. 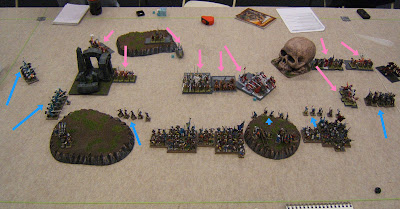 First few turns, we advance, I shoot. Excitement, no? I nailed his steam tank with a cannon, but only caused a couple wounds. My first turn I actually rolled misfires on three of my four artillery pieces, only one blew up though. 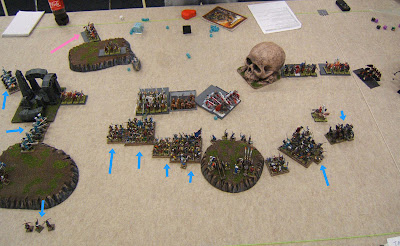 If his cav was going to hit me, I wanted to try to make sure that when he did, I got the most out of my detachments, so I advanced in the center. The steam tank takes a point of damage from a blown steam point roll. 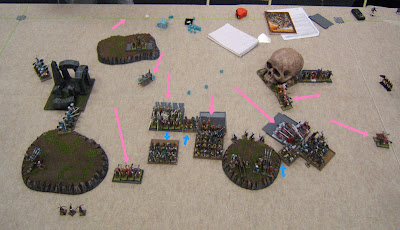 The left side is essentially mine, as I had hoped, though the steam tank could screw that up a bit. My plan is just to avoid it by hitting things (like the outriders flank) and moving on as fast as I can. My swordsmen momentarilly falter on the left side of my infantry center. General with Inner Circle knights charge in! But I hold!

Things go very badly for the Inner Circle knights and grand master. They are defeated and run down by the greatswords. I rally my swordsmen and move my knights in on the left. Flagellants charge in, but I figure I will beat them eventually and it only ties up a swordsmen unit - I take this as a fair (for me) trade. 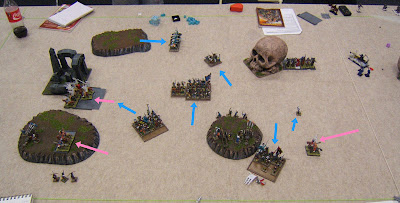 Here it gets a little hazy. I think my knights blew it against the Griffon legion, who pursued them into the difficult terrain (ruins), with my swordsmen in pursuit. As predicted, I finish off the flagellents and head for the deployment zone. Game over, victory for the Empire. Well, Marienburg Empire at any rate. Annother good game and good opponent.

Posted by ZeroTwentythree at 1:18 PM