I finished one unit of 25 Low Counties pike. They're Old Glory Flesmish Pikemen from the Wars of the Roses Range. I'm slightly less impressed with them now that they're painted. Before that, I had overlooked some of the strange faces on a few of the figures. For example, one guy's jaw is close to half the height of his face, so he looks really cartoony.

The poses are pretty good. The detail is decent. But a few of those faces... I'm proud of the fact that I normally paint eyes on all my figures (well, barring those that have visors or helmets obscuring their eyes...) but I just had to pass on a few of these, as it would only draw attention to the fact that the faces were that bad.

Still, some of the faces are pretty good, and a few have closed helmets, so it's a mixed bag. Plus there's the bonus you get with all OG figures - they're inexpensive compared to other manufacturers. En masse, I don't know how much you will notice. I still have to finish the bases and add some banners. Once the banners are added, I figure they will obscure a lot of the unit and emphasize the "big picture" rather than the individual figures.

They did paint up rather quickly. I've got another unit plus some extra figures to do.

I do need to find a couple command figures, now. Basically a leader and a musician for each unit. I've got a pile of Front Rank musicians due to an ordering screw-up (on my part), but they look too large in the OG unit. 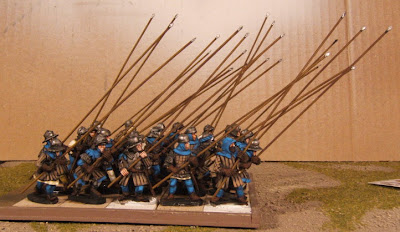 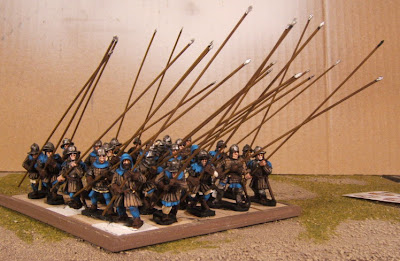 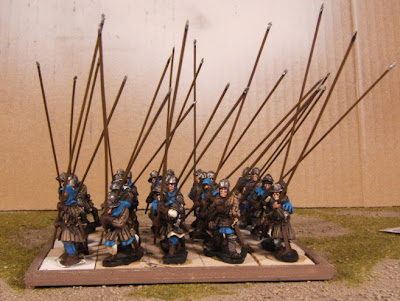 edit: Hrm... after taking a look at the photos, I wonder if I overdid the blue just a bit...

Posted by ZeroTwentythree at 7:14 PM