First game was against high elves. Scenario cards used were capture the flag and mutinous dogs (the latter was against me.) 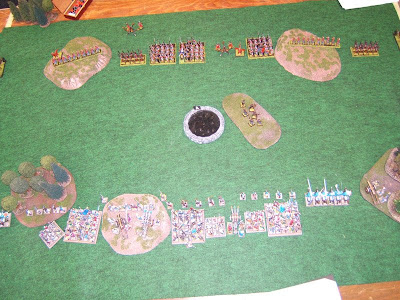 From left to right, I had, knights, swordsmen with archer and sword detachment, handgunners in front of a cannon and rocket, greatswords and detachments of archers and swords, rockets, more swordsmen with the same detachments, a cannon, and on the far side of the woods were more knights and a unit of pistoliers. 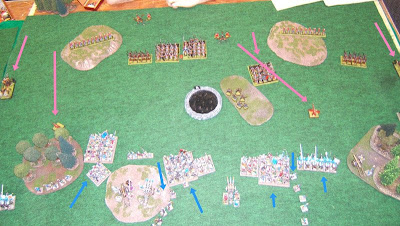 Opening moves, nothing too unexpected. I moved my archer screens to the back so I could both protect them from giving up extra points and try to cover the war machines from the eagles. The eagle on the right was to be a nuisance all game. In this instance, if I charge it, it flees, and I'm stuck getting charged by the spearelves with some swordmasters crawling up my flank. So I just let it sit there... 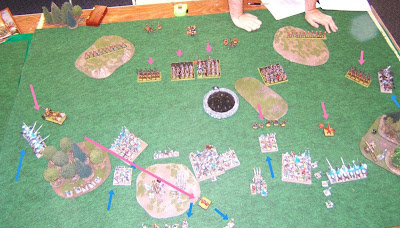 I wasn't going to let the chariot on the left hit my knights, so I held them back to keep an eye on my infantry's flank. The left eagle chases off a rocket crew after a single round of combat. On the right, things go a little better, outside of the photo, my pistoliers have blasted a lion chariot and are moving in on the swordmasters. 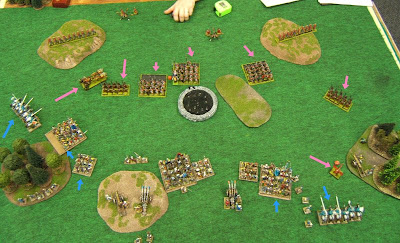 My knights chase the chariot on the left awayas my infantry spreads out a little to draw off the swordmasters away from the spearelves. That damned eagle on the left took two wounds from assorted missile fire, but is still in the way. I'd have to throw away a unit to get rid of it. My pistoliers are shot to pieces by RBTs and archers. The few remaining take off, as per their usual M.O. 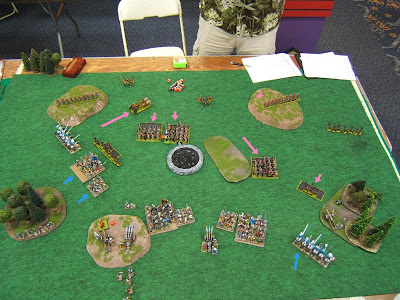 I charge and destroy the eagle, but my knights are then at the edge of the woods (not yet moved in the pic). I get the most beautiful grapeshot ever and kill 7 of 10 swordmasters. Spearelves continue to sit on the objective in the center. I continue to be a wimp and wait to resolve my right flank before commiting in the center. 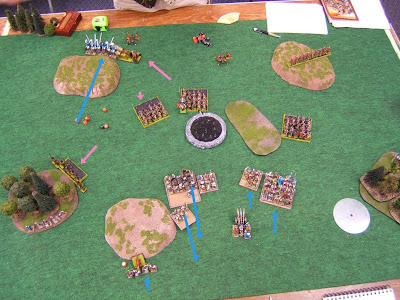 And then it all falls apart. The knights on the right destroy the remaining swordmasters and pursue through the woods due to hatred. That's the good news. On the left, swordmasters shred through my swordsmen and the eagle eats a cannon crew and follows up into some archers (arrow drawn wrong.) My knights get pinned by a reform (or wheel?) by the archers on the hill, so the knights can't move on the chariot, but can't get away from the chariot either. I figure if it's going to catch me anyway, I may as well take the archers down with me. In the center my greatswords and general move up, get pelted by arrows & RBTS, panic and take a detachment with them in the last turn. Game over.

In the end it was a horrible game for the empire. I was wishy-washy about too much, and got into a little move-countermove on too many things (knights and chariot on the left, and that irritating eagle on the right.) It was a good game, though, against a good list and a good opponent. I thought this was one of the best HE lists I've seen. It had a bit of something for every phase of the game and seemed very flexible. My opponent was very good and simply outmanuvered me just about everywhere.
Posted by ZeroTwentythree at 1:51 PM