I've fallen a bit behind. I'm just going to have to wrap these up in a bit of a slackerish manner so I can just get them posted and not forget entirely.

I went into Day two with a 2-1 record. I figured I would be up against some tougher armies the second day. For some reason I remember hearing that I was going to either face Brets or Daemons. I was hoping for Brets and got my wish. My last game against Brets was a slaughter, so I was optimistic... 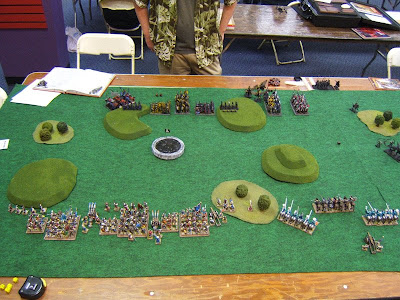 The scenario was capture the flag and mutinous dogs (I thought I could take out the pegasi for the VPs and keep them from claiming table quarters...) 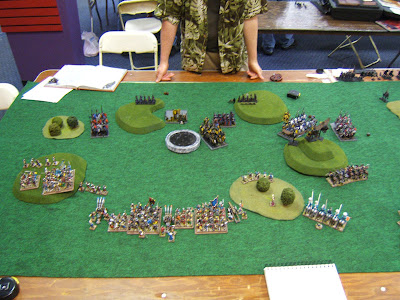 The brets advance. take a hill on the left, and push my cav into position to support each other on the right while still trying to pistol the pegasi to oblivion (unsuccesful.) I did land decent rocket shot on some peasants, though. I figured in a capture the flag game, that couldn't hurt. 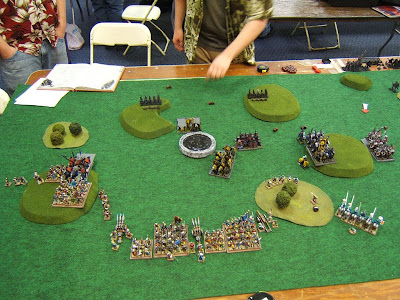 On the left my pistols and knights fall collapse, though I leave one unit of KotR in position to get flanked by my supporting knights. On the left I previously took the hill to use it as an advantage when the Errants charged. I managed to peel off a full rank of them with a lucky rocket shot, first! Not much luck wiht any of the other artillery. My cannons were failing me. 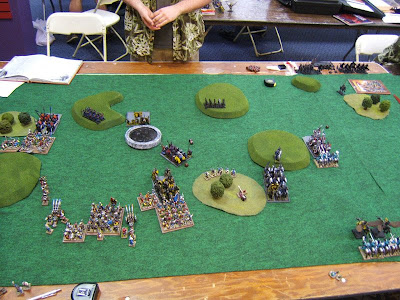 This is towards the end of the game. My knights on the left managed to tie up his KotR and pegasi, and my archers in the woods put a wound on the damsel (who left the one unit of KotR but quickly ran to the peasant unit) and march blocked the KotR. The big tin man's unit of KotR charge and smash through my swordsmen, who break. My general was in the unit but manages to do nothing useful. The KotR pursue the detachment so that the knights smash into the flank of the greatswords. No problem, right? They're stubborn. I roll boxcars on their break test and they flee the folowing turn, are destroyed and the knights continue into the rocket. On the far left I break the Errants but fail to catch them. They rally, I charge and win combat again, they flee again, and he moves his archers into a position to flank me, so I end up forced to turn and face him. Nothing definitive happens on that flank by the end of the game.


So with my center smashed and my flanks just barely holding on. the game was a disaster. Nothing really went right and I failed to get wounds in any manner whatsoever (melee, artillery, etc.) A few failed break tests just finished me off.

Posted by ZeroTwentythree at 12:07 AM