I recently received a preview set of Burgundian Ordonnance banners from Imperial Forge. ( http://stores.ebay.com/Imperial-Forge ). So here's the first set of photos & a bit of a review.

Actually, I'll get right to the photos (click to enlarge) of some heavy infantry... 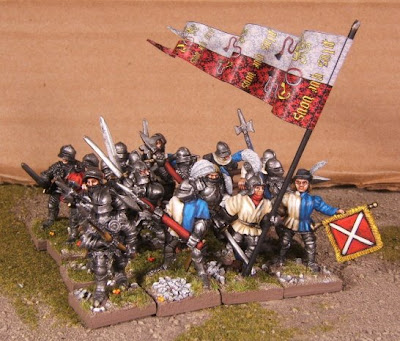 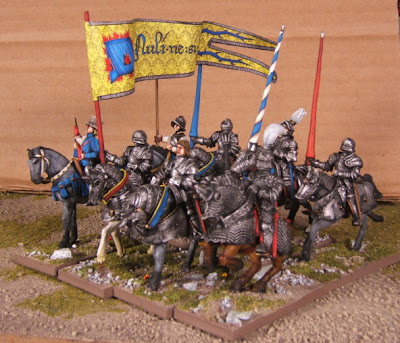 Those are the only ones I've got on figures right now. I've got some more that are "prepped" but are awaiting a few finishing touches on the figures on which they will be mounted, and a couple more still drying.

First off, a little background. I've been painting figures for, well, quite a while. I've gone through different materials & methods for doing banners, but I've always painted them myself. I want my Burgundians to look good (as I'd like all my armies) but after much consideration, I figured it would not be in my best interest to hand paint all the standards. So prior to receiving these standards, I tried printing my own on an inkjet at home with decent but unimpressive success.

So enter Imperial Forge's recent Burgundian banner preview. Even before I received them in the mail, I could tell from his own photos that they were more detailed than what I had pieced together on my own and definitely more detail than I could paint by hand. They're also right about the size I had scaled for mine.

So this week I started cutting & gluing the IF banners. Keep in mind that what follows is my first real experimentation with printed banners... I'm using brushed on watered down Sobo (PVA) glue. This has been a bit tricky for me. The paper drinks it up fast (the dry environment here probably doesn't help), so once I start sticking the two halves together, they don't want to move. I was afraid I was going to destroy one or two of them when I had to pull them apart a few times, but they survived intact. I'm getting better as I go.

While they dry, I am wrapping them around various plastic tubes, paint brush handles, paint bottles, etc. to get them to dry in a wavy manner. I tried giving one some more "extreme" folds, as I saw someone selling pre-fab banners at Historicon with severly wrinkled folds, but I was less successful. These banners appear to be on a slightly heavier paper, so the folds were creating some unattractive wrinkles/lines in the paper & printing when you looked very closely. I'll stick with the curvy waves as above from now on. The ones I saw at Historicon may have been on thinner paper, possibly regular stock, since they were a bit less colorful if I remember correctly.

Speaking of color, these are nice and bright. Almost a bit too bright compared to my figures. This may be a trick of the slightly gloss finish of the banners. This was helped by hitting them with a layer of clearcoat, and did take the edge off the gloss. You can still see a hint of it in the photos, but a second coat should do the trick. I also ran a thinned layer of paint very carefully along the edges of the paper, to hide the barely visible white thickness of the paper.

I think one of myh favorite things about the banners is the texture on some of the fields. You can see it in the photos above, but it's not overbearing. Definitely something I would not have had the patience to paint had I done this by hand.

My own inexperience with printed banners aside (though I've improving as I put more together!), the only downside is that some of the text is a bit hard to read on one of the banners. The one I'm looking at now (I'll post a pic in the next day or two) is the St. Judas banner, with the Je Lay Empirins motto and details in yellow (or/gold/whatever) on a black background. I notice a black outline helps define the details and lettering on the other colored fields, but I think on the black one is a little visually confusing. A similar thing happens with the more delicate/thin areas of the fleur-de-lis on one of the other banners.

Speaking of saints, I do like the level of detail on the saints' images and the tiny lettering identifying them (which is legible.) I hope to see a St. Thomas banner in the next set, since I share a name and occupation with him. ;)

So basically, I'm pretty happy with the banners. I'm a convert. After seeing the two above in place, I'm planning on using more for the rest of the army. As I said, I don't have a lot to compare these too, but compared to my own attempts at paper banners and the thought of trying to hand paint them, I'm digging the Imperial Forge banners and will be on the lookout for more.

Posted by ZeroTwentythree at 11:17 PM