I do occasional commission work and have been sporadically painting a few Warmachine Khador figures for one person in particular. Recently I picked up enough Khador figures for a small starter force for myself, as mentioned in my last comments re: Loot.

So I've started working on 4 big Khador warjacks this week. Two on commission and two I picked up for myself. My plan is at each step I'm using the latter as a testing ground for techniques to use on the former.

I've done all of the steel portions so far, though I think they will get one very thin wash before I move on. I've used a similar technique to one I recently read about on the Too Much Lead blog. The difference being that I reverse the first six stages or so. But I am working with small details where that article is dealing with edges along larger areas.

What I've done is start off black, then a sloppy coat of a an orangy-brown mix. Then I start drybrushing a mix of the orange and/or brown with some dark steel metalic, then just some dark metalic, then I start feathering on some lighter metalics & silvers along some of the edges and spots I want to look scraped or clean. So I end up with weathered metal with a bit of rust in the recesses, but cleaner looking steel on the edges and areas where it would be more likely to have rubbed off. 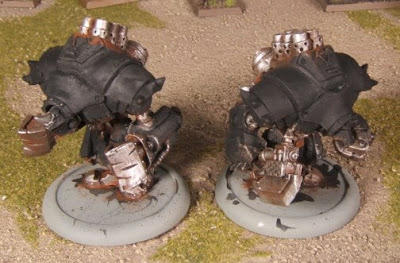 The top pic are my two figures, the bottom two are the commission pieces. It may be a bit difficult to see the details of the "rust" in the photo, but I think it gives the general impression. (As usual, click the photos to enlarge them.) After I paint the rest of the "painted" surfaces & details, I'll probably go back with some very thinned down orange and add some rusty streaks where they make sense. It may not show well, though, since the "painted" surfaces will be red.

I forget the names of all of the above warjacks except the twin-axe wielding loonie, who's a unique warjack named Drago. He was about 25 pieces and one hell of an assembly job. The two I bought were already assembled, but were glued together pretty sloppy. I'm hoping the weathered look & rust helps hide some of the sloppy glue.

Posted by ZeroTwentythree at 6:36 PM