I've got at least a basecoat and wash on everything but the weapons & shields. I've started highlighting the clothing, belts, etc. after this pic.

I'm going to try saying some nice things. The detail really is pretty good on these figures. Although I complained I was disappointed in the variety of heads, I do like the detail and expressiveness of the faces. There are a couple of awkward mold lines, but that's plastic figures I suppose.

The folds & details on the clothing are nice. A tiny bit on the smallish side for fast painting, but it's not a bad thing per se.

There was a little too much daylight coming in the windows (from the left) for the camera settings in the photo below. 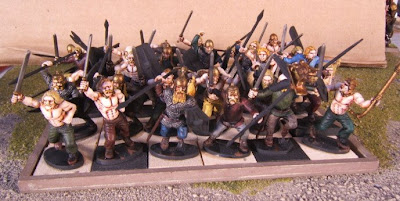 I've recently re-read Agricola and Germania, and I'm about half way through Caesar's Conquest of Gaul.

Since I was "in the mood" I decided to reserve the first season of Rome on DVD at the library. I just got done watching the first episode. So of course now I'm thinking, "well, a Roman army wouldn't really require too many figures, and I could use Gauls or Germans to fill them out a bit. And I could do some civil war stuff with the one friend I've managed to get interested in WAB recently.

I've got the attention span and focus of a typical wargamer.

So I am seriously considering a small Roman force. I probably will go ahead and try out some of the new plastics. What can I say, they're the latest craze. And they're affordable enough to make my lack of focus somewhat acceptable. I just have to decide between Warlord & Wargames Factory.

Posted by ZeroTwentythree at 8:40 PM