I'm more or less done with the figures. I still need to base them. I had considered doing some plaid/stripe/tartan/check patterns on some of the clothing, but I'm not sure I've got the enthusiasm for it at the moment. But I'm a moody painter, so who knows what tomorrow will bring.

After I transferred the photo to the computer, I noticed the menacing figure coming around the cardboard backdrop. I decided to leave him in. (He's one of a group of figures I'm touching up for a friend.) 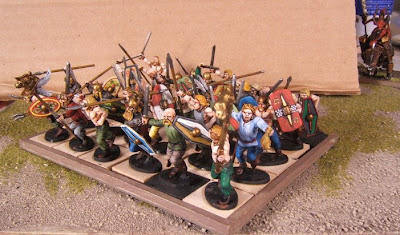 So, after doing all of this on the Warlord Gauls, how do I feel about them?

Middle:
There's a certain ability to create variety with the figures, but considering the potential for multi-piece figures, there's a lot of same-ness to the figures. If the would have made the bodies single piece, but with a variety of separate arms, this may have turned out better. I don't know. I bitched about the heads already, more variety there may have helped also. Still, compared to something like a range of say, seeing the same 12-16 metal figures over and over, they're not really worse off.

The way I see it, they are nicer looking competators to Old Glory figures. They're both cheap and make it more affordable to buy a huge barbarian horde. The trade off is that although you get nicer looking figures with cleaner details than Old Glory (in my opinion), you end up paying for it through time spent cleaning & assembling the figures.

Maybe that gets quicker with practice. I doubt it, though. My WFB Empire army could probably grow to twice its size just with plastic kits hidden away in my basement. But after putting so many of those plastic figures together, I've lost the will to continue for the moment. In contrast, I just quickly cleaned up some more metal Front Rank medievals for my Burgundians. They're quality figures, and I pay twice as much for that. But I spent a fraction of the time prepping them, which means more time painting.

So while I'm not going to bash Warlord's Celts, I can't honestly say I'm a huge fan. I do look for a good balance between price and quality. Unfortunately, I think the frustrations of these figures listed in the "cons" column push them just barely over my tolerance. The newly announced mixed metal & plastic Britons don't help generate enough enthusiasm for me, as I'm not fond of mixed plastic & metal kits and can already image the problem, for example, of a plastic figure with a metal carynx or standard.

I still can't comment on Wargames Factory, as their Celts haven't shipped. I'm going to assume that they will still involve similar issues in terms of prep time. But if they manage a similar level of detail while avoiding goofy looking poses, and manage to rank up decently, they could swing my opinion the other way a bit. Addressing some of the variety issues would help, as well. Even better if they scale up with Warlord's figures, since that would help with varity already.

I'll post some final pics once these are based.


Coming next... more Burgundian Ordonnance. A preview of some new banners from Imperial Forge. And maybe a battle report from a Thanksgiving weekend showdown between Bold Chuck against those pike-wielding pussies from the Alps. The Burgundians are practically guarenteed a win. ;)

Posted by ZeroTwentythree at 1:02 PM