So I just took 2500 points of Burgundians against their best-friends-forever, the Swiss, and managed to snatch defeat from the jaws of victory. Charles would be proud.

I only snapped one pic, a bit blurry because my newer-better-more-expensive phone takes the crappiest photos on the planet. 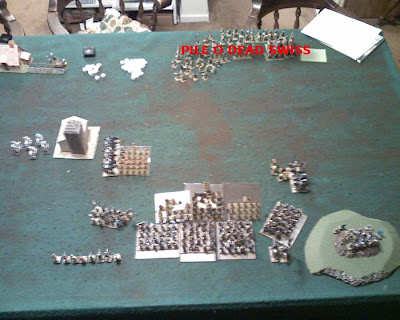 This is at the turning point, from behind the Burgundian lines. On the left are some Swiss mounted crossbowmen and way back behind a wall by the farmhouse in the upper left is their ribaldquin that never fired a shot. To the right of the building are my coustilliers who had plowed through the shot-up remnants of some halberdiers, then through some skirmishers, and into the flank of a pike unit. Just to the south of them are some dismounted gendarmes waiting to join the fight above. Behind them are some skirmishing handgunners who had fled from the afore-mentioned but now annihilated halberdiers, but later rallied.

To the right of them is the Fustercluck Royale. (Pardon my French.) On the Burgundian side we have (from lef to right) ordonnance archers with hand+half swords, Low Countries pikemen, and ordonnance pikemen. A second unit of archers with hand+half swords has maneuvered around the flank of the Swiss line. On the Swiss side (again, left to right) are unarmoured pike, gewalthut with heavy armour, and more unarmoured pike. The Swiss were the chargers. My mounted general and BSB moved left, from behind the lines, just in case they needed to avoid the fleeing of their own troops. On the hill to the left are some Burgundian crossbowmen. Not on the table are some more Swiss halberdiers and a huge unit of allied knights and lighter cavalry in a combined formations. To the north of the hill are my gendarmes who were running down successive waves of skirmishers desperately throwing their bodies in my way in an attempt to slow me down. (Halberdiers had killed several gendarmes already, due to my inability to roll anything but 1's for their armour saves. This is a curse for me in WAB, as my Sarmation cataphracts always did the same thing. I can make saves for nekkid guys with wicker shields all day, but never for the tin-men on horses.)

So I was doing OK up til this point. The Swiss had a substantial pile of bodies, and I had lost a cannon, some skirmisers and a few gendarmes. Due to the loss of the skirmishers, though, the resulting combat above aligned funny and was one single combat involving six units. This was my downfall. I did OK with two of my three units, and considering that I had worn the Swiss down already, I would have probably won the two outside combats if they were three separate ones. The pain came from the gewalthut in the center. Not only did they still have all their ranks, they did a lot of damage in combat and my Flesmish pikemen were typically ineffective. (I notice they make a good scapegoat for the Burgundian dukes, so I'll work with what history has provided.)

In the subsequent break tests, my archers on the left stay, but all the pikemen run. And run fast. Off the table. Then the panic tests set in. My coustilliers, who had just beat the tar out of the pikemen (who were stubborn, so stuck around despite casualties) AND the mounted crossbow (who had charged them in the rear but then fled from the combat), take off running. The archers who were ready for a flank charge also take off running.

The subsequent turn, my dismounted gendarmes charge the pikemen, but with a less secure position than if the coustilliers had stuck around. The archers on the left lose combat again and are run off the table. The Swiss pike swing in to the side of the general, who panics from the loss of the archers, letting the pike hit the BSB instead. Except that the general is caught by pursuit. Dead, so more panic tests all around. Everyone but the dismounted gendarmes fail. The worst of it is that my mounted gendarmes flee from skirmishers. How embarrassing.

I get the last turn, so most of my fleeing troops do rally, but the loss of 3 big blocks of infantry plus the mounted gendarmes (who were below 5 figures at this point) hurt. The fact that I had beat up on several of his pike units didn't help, since they still had small remnants left. If there were half-points as in WFB it would have been a closer game.

So the big battle in the center was the pivot. Two things went wrong. One was the alignment of the combats. Second was bad break & especially bad panic rolls.

Fun game nonetheless! 2500 points in about 1.5 hours. That included a bit of flipping through the books as we were making sure not to confuse WFB & WAB rules. Afterward we both commented on how much more fun WAB feels vs. WFB anymore. We're alreay speaking of a rematch and getting a couple more people for either a mini-round-robin or team game in the Classical period.

Posted by ZeroTwentythree at 11:20 PM