I got another 2500 point game in with the Burgundians, this time against Wars of the Roses English -- the Yorkist pretender variant.

The photos are pretty bad, but I just snapped a couple and didn't really look at them to see how they came out, for the sake of not interrupting the game. (Click on the photos to enlarge them.) 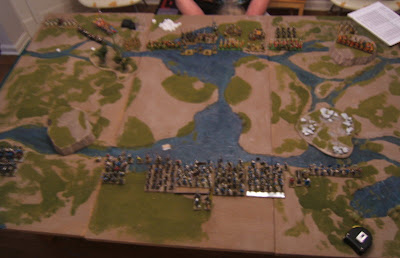 The marshy ground was all considered open terrain. To the left, in the photo above, are a small wood and small hill, on the right are another small hill and some difficult terrain.

The cunning Burgundian deployment, again from left to right, consisted of... Coustilliers with gendarmes behind them (two separate untis), handgunners screening dismounted gendarmes and low countries pikemen, and skirmishing archers screening two units of ordonnance archers (with hand + half swords) and ordonnance pikemen (between the archers). To the right of them, more or less behind the rough ground, were a light cannon and a unit of crossbowmen.

So my plan was to hope to carry the left flank, stall on the right, and advance as quickly as possible in the center. I had to resist the temptation of shooting with my longbowmen for fear of being outgunned by the English. This more or less worked. I tied up his hobilars with my coustilliers for a few turns, chased his archers off and smashed into his knights, who crumpled in one turn under the glaring brightness that is the star of Burgundian chivalry. ;)

In the center, I weathered the hail of arrows and multi-barreled guns pretty well. It helped that my opponent rolled like crap for his archers, but I do have to say that now that I've seen the multi-barrel guns in action, they are NASTY. 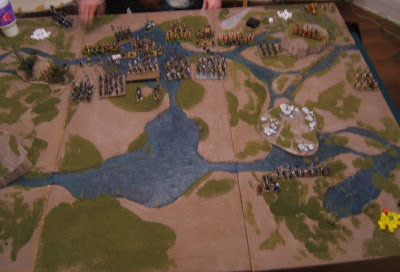 Rolling up the left flank was helped by a single turn of panicking of the English billmen near the woods which put them in a bad spot and let my cavalry and low countries pike overwhelm the remaining troops on the left side of the English center. On the right half of the center the gun crew were more or less chased off, but at the cost of my rightmost archer unit. (They did survive but took heavy casualties but panicked and then rallied.) The ordonnance pikemen and archers spent a few tense moments locked in combat with the Irish, but eventually my larger units won out.

And I think that's where one of the subtle differences came in. The English had a lot of small units, the Burgundians had fewer but larger units. Due to the clogged English deployment and static nature of the shooting-heavy list, he couldn't bring his advantage of manuever to bear, so I was able to hit individual poitns on his line and win out even when I got bogged down. He was even a bit crowded to react quickly enough. My cavalry on the flanks helped this too.

So this was a total reversal from my game against the Swiss, in which I was more passive & tried to shoot them up before they impacted my line. Similar results -- some heavy casualties on the way in, but once the aggressor hits, the trouble starts for passive army.

Another good game. Both of us again agreed that we're preferring WAB to WFB right now. We're talking about doing some Classical era stuff in the near future, but for now I am more than happy with late medievals, and think that 2500 points is a really decent size but still allows for a very quick game.

Posted by ZeroTwentythree at 5:45 PM