Rome for the Post-Holidays

I recently wrote the first part of a review of Wargames Factory's Caesarian Romans. Here's the remainder of my comments after finishing the rest of the unit, including command... 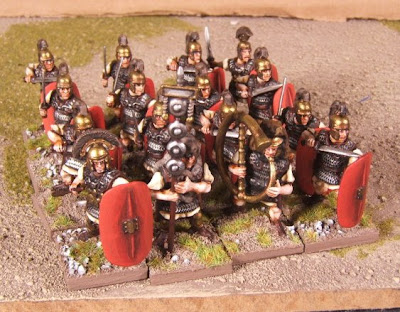 Again, I've got to admit that I'm pleasantly surprised. The rest of the figures painted up pretty quickly, it was just more of the same with the exception of the command figures. I've got to say they are the weak point of the set.

I'm not fond of the faces on the centurian or optio (especially the optio). All four of them had a strange junction between the legs and the lower portion of their armour & shirt, like you could see a cuve of plastic connecting the legs when they should have looked more like they abruptly disappeared into the clothing.

One issue I've previously read about was the lack of depth on the fur. When I looked at the unpainted figures, I thought the same thing. When I primed the figures, I noticed that some of the other details were more apparent (as others have also said), but thought the fur just looked like a slightly rough blob. But in the end, I used a light touch when painting them, and using only a base coat, wash (two washes on the wolf pelt) and some quick drybrushing and they did't turn out as bad as I had expected. The faces on the pelts are still a bit lifeless, but I don't think the texture on the back turned out bad at all. So again, I had low initial expectations, but was pleasantly surprised. 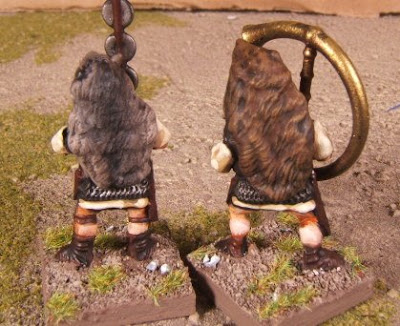 So that's about it for now. I'm hoping to get the remainder of the set painted up in the near future and I'm considering picking up a second set (at least) in order to field a full blown Roman army. Even considering the more involved prep time of plastics, I think I can paint up enough for a full army quickly, and affordable (or at least the legion infantry portion of it.)

I had been set against it previously, but I've just signed on for a bunch of the WF "Liberty & Union" sets. I'm still a little bitter about the Celts, but I'm going to give them the benefit of the doubt regarding future releases. I could easilly see plaing 3-4k games of WAB affordably using WF figures for a fraction of the cost of a more "standard" sized 2k army in metal.