Technically I was in the medieval division, but the only other player signed up was my first opponent, Chris. So our subsequent games were a bit out of period. 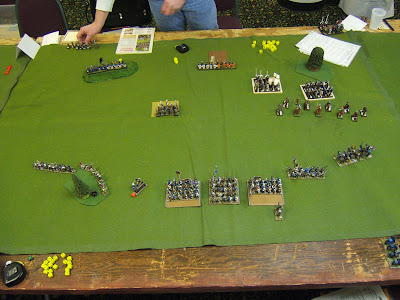 Teutonic deployment, from (photograph) left to right, plate armour & pavise crossbow on hill, spear, more heavy crossbow, two units of knights screened by skirmishing crossbow cavalry. This is one turn into the game, and we've both lost some cavalry. I believe there was a unit of Teutonic cavalry on the left, in front of the crossbow that took some missile casualties and fled. 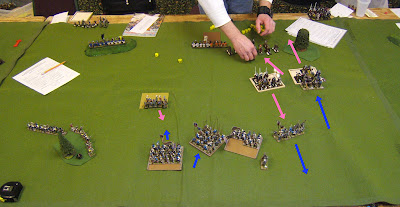 The second photo is a few turns in. My light gun was shot to destruction by the Teutonic crossbow. After that our crossbow spent the entire game wasting shots on each other. My handguns and leftmost archer units whittled down the spearmen until the archers were able to take them in combat.

The central Teutonic crossbow did a decent job shrinking the archers on the right.

At this point my mounted gendarmes chased away the skirmishers, crashed into the knights, ran them down and ended up in the woods. The skrimishers later rallied, but were again chased away by the gendarmes.

My dismounted gendarmes waited to recieve the charge from the other unit of Teutonic knights (including general and army standard). All I needed was to make the stuborn roll on the initial charge so that I could swing my pikemen in on their flank. No such luck. The Burgundians were run down, the Teutonics pursued them off the table. Not the best result for me, but the knights were effectively distracted from any further damage. Further proof that the flower of Burgundian chivalry belongs on horseback, not on the ground.


In the end it was a victory for the Burgundians.

Posted by ZeroTwentythree at 11:27 AM