This was a blind set up and I didn't notice the location of the woods opposite me before deployment. 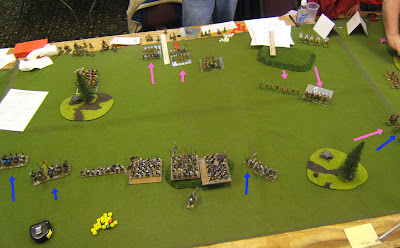 From (photo) left to right, the Crusaders had Knights, three units of archers with spear in the front rank, screened with two units of skirmishers, skirmishing elite cavalry of some sort, skirmishing crossbows on the hill, and more knights on the right.


This first shot is taken early in the game. The opposing skirmish cavalry jumped right into a small gap in my line, and I've shot down some of the skrimishers screening his infantry. My cavalry are in the middle of a slight shift in deployment. 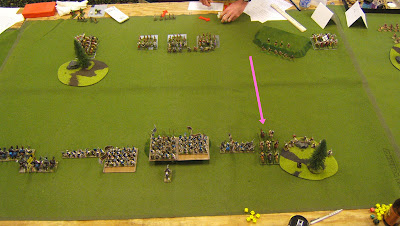 Most of the center and left were pretty static. I shot at his infantry, they backed off. After that it was at a point where even if I ran for the remainder of the game (4 turns), I would possibly get one turn of combat with them, but my dismounted gendarmes wouldn't be able to keep up. And I would have to run through his massed archery. I can understand his reluctance to run into my archery as well, however.

I did get lucky when his knights charged the handgunners, the handgunners managed to kill half the unit on the stand-and-shoot and the knights spent a couple panicked turns reconsidering. ;) The skirmish cav then chased off the handgunners, though I at least tied things up on that flank with a single unit.

I wasn't able to finish off the knights on the right or the skirmish cavalry, so once again, all I lost were my handgunners and all I managed to do was chase off his skirmishers and kill a bunch of archers/spear without effect (or points.) Another draw. I think if we hadn't done the hidden deployment, this might have turned out differently as I probably would have reversed my mounted units and my dismounted gendarmes.

I'm rethinking the dismounted gendarmes in the first place. They're nice as a small but solid anchor to a flank. It makes the archers and pike a little more secure. But in games where I'm on the offensive more than the games at Cold Wars (against English or Flemish, for example) their slower rate of move is a liability. Similarly, when the opportunity does come to take advantage of some unknown, they're once again, too slow. For example, after the knights on the right in this game panicked, I couldn't press that advantage and chase after them.

I think this is partially my own indecision in using a "combined arms" army, partially my feeling cramped in army selection at 2000 points. I may consider dropping them, though.

I'm having this strange "guilt complex" about playing three fairly static games. Part of the reason I play the BurgOrd is their flexibility in being able to play static or mobile (commends about the heavy foot aside.) At Historicon I was totally on the move in 2 of 3 games, and I've had a mix against other medievals as well. But playing 3 games in which I didn't move seems like I missed out on the "pushing toy soldiers around" part of the game. On the surface, I realize that sometimes it comes down to this, and certain other armies are entirely based around not moving. But I like to be a bit more mobile. (See also: previous army choices.) I'm going to write this off as a fluke due to playing out of period, but I can't help thinking I did something wrong. (The two draws doesn't help...)

Posted by ZeroTwentythree at 12:16 PM