I'm not familiar with BtGG nor have I really played Burgundians out of period before, so this would be a bit of a learning experience for me. Since I haven't played anything but medievals for quite a few years, I was a bit rusty on the elephant rules, which almost turned disastrous. 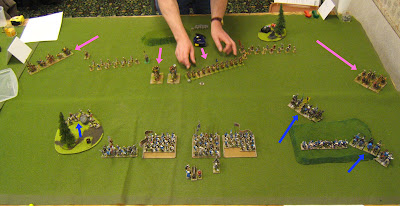 First pic is in the second half of the first turn. My opponent's deployment from left to right in the photo... On the left, Uber Klibinari of Doom (henceforth UKD), a unit of bow armed militia flanked by two mounted heroes, two elephants, more Kilbinari but not the ones that get to reroll missed attacks, the general and standard bearer (both mounted), more archer militia, and more UKD.

My deployment, starting on the left... Skirmishing handgunners in the woods, dismounted gendarmes, ordonnance archers, pike with cannon & general behind, more archers, mounted gendarmes, crossbow with pavise on the hill, and coustilliers making their way around the back of the hill.

No problem, I thought. I'll blast the elephants with my cannon. Many misfires (and a 1 to wound when I finally got a hit) later, I managed to do absolutely nothing to them. Same for the piles of bow and handgun shots I unloaded into them. Waste-of-time. 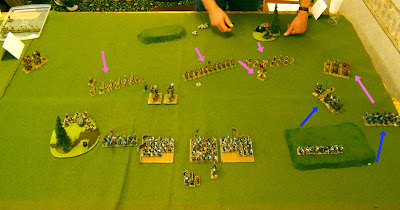 So for most of the middle of the game it was a bit of a shooting match. The threat of the elephants and a rolled flank on the left kept me from advancing beyond the woods in the center & left. The Persians seemed just as content to sit back and shoot at me anyway. In hindsight, I may have done better to try playing more aggressively, since his 2+ save on the UKD, difficulty to hit his characters & skirmishers, and toughness of the elephants meant that my shooting would do little. On the other hand, his shooting wasn't terribly effective either.

On my right I chased back the UKD with my two units of cavalry before they could slip around my flank. I pressed this area of the battle quickly so that I could try to keep them from slipping away from my less maneuverable (than Klibinari??) cavalry. So eventually I sent them running and chased them down. One unit of militia also panicked, but managed to rally before getting off the battlefield. 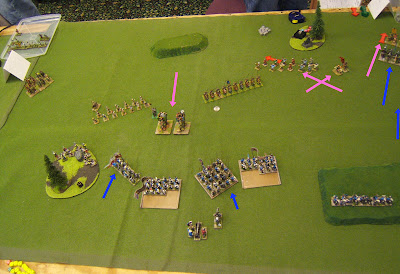 Towards the end of the game, the elephants came forward and I hit them in the flanks, not realizing that: a) I would get no rank bonus while fighting them, and; b) if I broke them they would trample into my unit on the opposite elephant's flank.

In the end it was a draw. I lost my handgunners (his two mounted characters charged them in the woods and cut them to pieces), he lost one unit of UKD. Those were about the only casualties of the game.

Posted by ZeroTwentythree at 11:46 AM