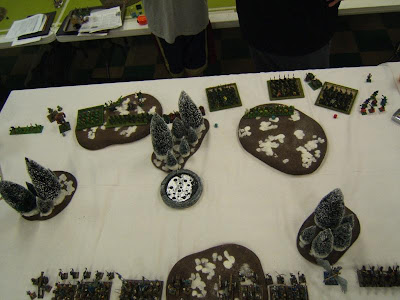 From left to right the green menace had something along the lines of: snotlings, bolter, giant, archers, NG archers, bolter, catapult, doom diver, spider riders with spider hero behind the woods, NG with shaman lord, NG archers, gobbo spear, chariot, NG with BSB, squid hoppers. Somewhere I think there was another shaman. Or maybe a hero. I forget. I was a bit scatter brained all weekend.

The scenario cards played were capture the flag and pitched battle. I was the one who played capture the flag, thinking that gobbo infantry is soft and easily panicked. I figured with all of my infantry and the volley gun trained on the center, I could just stall and even lose on the flanks (as long as I did it slowly) and get all my points dead center. 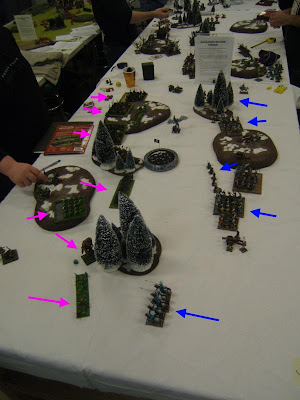 So with that in mind, here you see the first turn. You can see I only inched up in the center, moving archers out to draw out fanatics. The pegasus moved forward, hoping to get safely behind enemy lines and work the Casket of Sorcery an the big shaman, and possibly start hitting the war machines if my cannons couldn't take them down. Which they couldn't. I was consistently about 1/8" away from hitting them, much to my frustration.

On the near flank I moved my knights up to block my end of the bottleneck by the woods. Fighting snotlings would be stupid. Allowing the giant on my flank double stupid. But if I could just sit there and make him wait for me, that would be fine with me, too.

On the far flank I did something similar. I moved my pistoliers up to shoot at squig hoppers, with plans to flee from a charge, leaving the knights behind them to countercharge. (Assuming they didn't blow any panic tests.)

That all fell apart when my pistoliers killed just one hopper, then ran only 4" from the charge and were destroyed.

On the gobbo magic phase in turn 2, those far knights, the pegasus, and several other units suffered massively to magic, such as the never-ending Gork's Warpath (or whatever it's called) 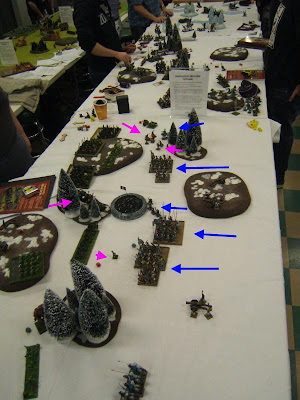 Further progress. Further magic and artillery death on my side. I failed every dispell roll by rolling exactly 1 lower than I needed.

I start to move forward. The standoff on the near flank continues. 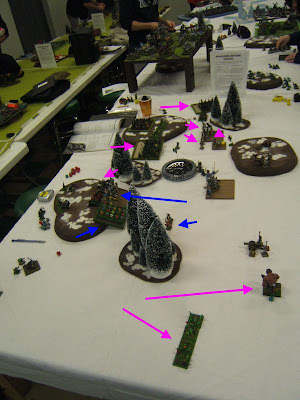 The snotlings eventually move forward, blocking the giant. I figure I can at least clog that up wiht my knights. I failed to damage them, was charged by the giant, destroyed, etc. Moving up the line, my swordsmen slip past a lone fanatic, charge the archers, easily defeat them, hit the spider riders that moved over to cover the artillery. They hold, I get counter charged by a big block of archers on the flank. They destroy me. My pikemen are depleated by magic and artillery. In the distance a boatload of fanatics are released, turning the battlefield into a mess of a traffic jam with my swordsmen stuck waiting around. Eventually a couple fanatics pass through them and mess them up pretty badly. 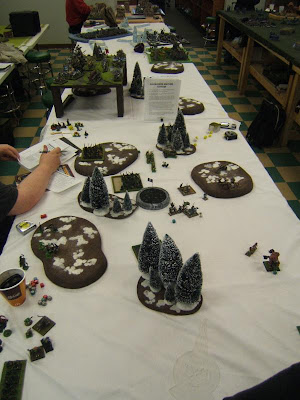 End o' the game. My few remianing pike mop up the few remaining spider riders. My general lives. I thought I took down the giant with a cannon shot, but maybe that's after this photo was taken. He had one wound left by the time he was coming around my deployment zone. Otherwise most of what's left are my characters and artillery. Devastation for the Marienburgers.

That's par for the course, though. It wouldn't be an Indy GT if I didn't lose the first game. So I was OK with that. Even if the massacre was exceedingly one sided.