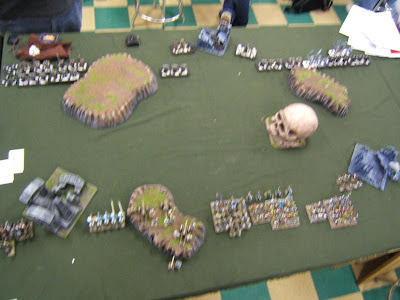 
Marienburg had, from left to right, pistoliers, knights, 2 cannons and a volley gun on the hill, two wizards hiding behind it. In the center were the pike, then both sets of swordsmen with their detachments. On the far end was a lonely unit of 5 doomed knights. 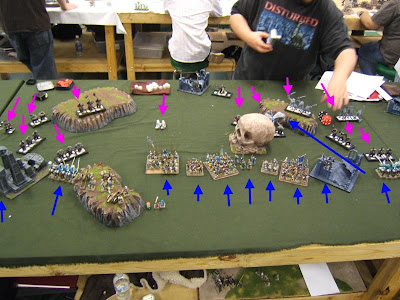 Early in the game. The race is on. On the right, my pistoliers run up and shoot at... someone. I forget who. Doesn't matter, they missed with everything (as usual.) The ogres advance fast, over and arround the hill. My knigts move up to discourage them from rushing my artillery. The big Empire Guns blast away at a hunter and some kitties, killing some of both. Empire pegasus flys behind the leadbelchers and bulls near the skull terrain, but the captain gets blased off his mount and the pegasus sits their wimpering the rest of the game. On the right side, ogres again, advance fast. My knights move up to stall as best as they can. 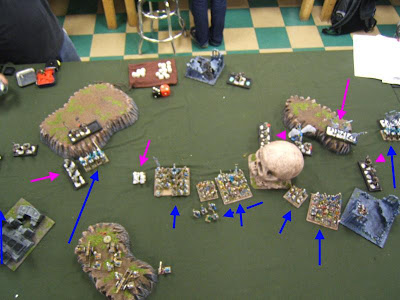 On the far left, the pistoliers still try to dance around and shoot but fail to wound anything and end up running off the table after getting shot up for a couple turns by the tyrant's handguns. Again. Worthless bastards. The knights pursue after beating some bulls, and charge the ironguts on the hill. The tyrant out of the shot on the left) catches the first of several cannon balls, taking only a single wound. Not much happeneing in the ceneter. I try to move around to the bulls before my right can be overrun. My knights on the right charge & pursue more bulls, landing about 1/2" in front of a group of yeti. 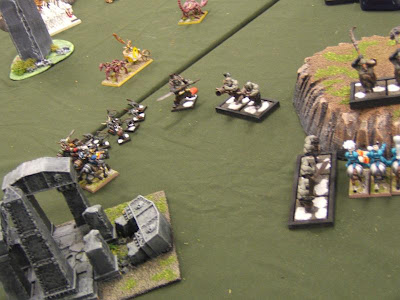 Pic of the left flank. 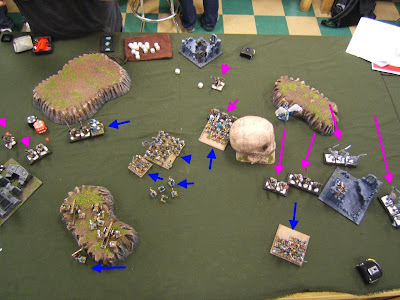 Not sure I remember what happened here. I think my knights fled combat, then rallied and charged the ironguts, while the bulls who previously landed on my knights flank got shot to pieces by a cannon. Volley gun finished off the kitties. Around the skill, my swordsmen finally engage the bulls on teh left side, but just around the skull from them, the other swordsmen get multi-charged by ironguts and leadbelchers and break. My knights on the right are eaten by yeti. Not sated, the yeti bear down on the archers hiding in the ruins. 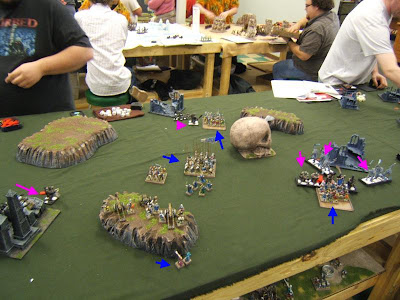 Hard to see in this pic, but my knights beat the ironguts on the left and pursued into the ruins where they were ambushed by gnoblars. No problem, right? We've got all this armour... so one would think. The tyrant starts pressuring the artillery, even after catching another cannonball for another two wounds. The volley gun kills the leadbelchers on the left. In the center the pike continue to run in cirles looking for an oppnent. Anyone. Really. The swordsmen on the right rally and put up one last fight at the table's edge. Archers are eaten by more ravenous yeti. 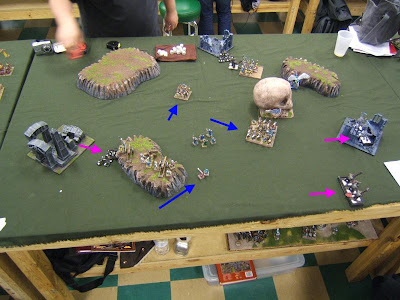 This is around the end of the game. Here are the gnoblars running out of time to get to the artillery after they kicked the knights asses. No, I couldn't kill any of them. Yes, they killed knights, beat them in combat and ran them down. My artillery mops up a bit, finally taking down the tyrant with a third cannonball. ANother cannon shot takes out a unit of yeti, and bowmen finish off the last leadbelcher with a lucky shot. I think one last cannon shot took down the second hunter, as well.


Game ended in a victory for me. Still it was a tense (in a fun way) game. I felt the pressure on my flanks all game, especially around the artillery (who really won the game for me). Half my infantry spent a lot of the game looking for a way to get into combat.

Posted by ZeroTwentythree at 10:16 PM