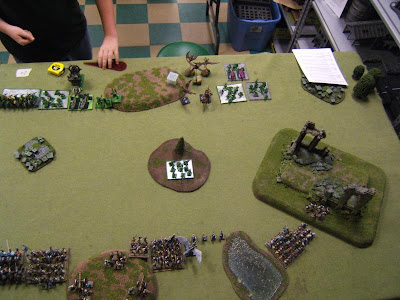 From left to right, the Lizards had... Saurus cav, skinks, spikeydinos, krox, terradons and a terradon hero, carnosaur with hero, two units of skinks, and salamanders behind them. In the woods in the center are som chameleons.

From left to right, Marienburg had... Knights with pistoliers behind, pikemen, two cannons and a volley gun on the hill, swordsmen and detachments, with a pegasus hero hiding behind them, and on the other side of the pond, the other set of swordmen & their detachments.

My opponent had apparently rolled his spells either before the tournament or while I wasn't looking. Something I would have normally been a bit miffed about. However, I stole (& cast) the best spell right away (Comet) so I guess it all worked out. (See below.) 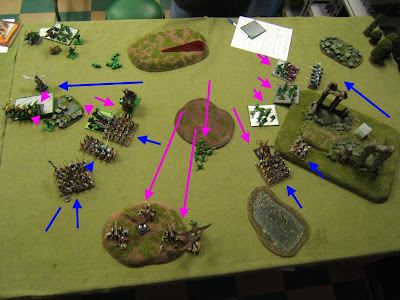 This is a couple turns into the game. On the left my pistoliers have run their usual mission -- leave the table as soon as possible. I don't know, I might have just marched them right off the table edge. They were just that good the entire tournament. Again, the killed nothing. Maybe a lone saurus cav. I don't recall. The knights pass in front of the pike, who try to swing left to engage the saurus and hopefully bottleneck them in in next to the terrain. They got stuck moving through it, so were already slowed down.

My knights took some hits from the porcupine dino things but stuck around. Swordsmen in the center got a flank charge on the krox, chased them off and made the bad decision to pursue into the porcupines. My first thought was that it would be the best way to get into combat -- I wouldn't have to suffer through the stand & fire, and I'd get my ranks, hit them in the flank, etc. I failed to cause a wound, got bogged down in combat, which allowed the Stegadon to flank me. Previously I had been nailing it with cannons for a couple turns, but didn't do anything to it due to hitting skink crew and the 5+ ward save abillity. My Captain on the pegasus did stick around and steal spells with the Casket of Sorcery, though. In fact, combined with a misfire, by turn 3 the skink shaman had no spells left to cast.

Lizard birds soon took down my artillery anyway. I got a chance to blast at them with the helblaster but failed miserably. One died from the unit of 3, but that might have actually been from the cannon crew in combat. (!)

On the right, my knigts round the ruins and head towards the salamanders. My second group of swordsmen get charged by the carnosaur. He does very few wounds, and in exchange I actually wounded the beast. He loses combat but makes his break test. Over the next couple turns that is repeated, including my getting a flank charge. I was beating him by 3 and 4 points of combat res, but he made his break test every*single*time. Very frustrating. 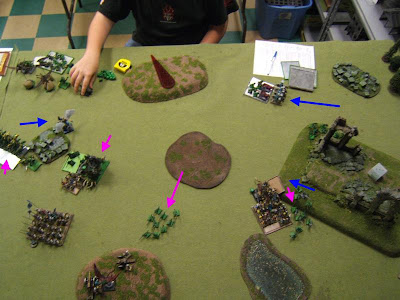 More of the same. My pegasus lead the cav on a wild... uh, pegasus chase. The steggie busts through the swordsmen and into the knights. The pikemen brace for combat. My artillery crew still getting munched. I think the helblaster finally took down the unit of terradons. On the right the swordsmen vs. the king of the jungle grinds away... he's still passing break tests. 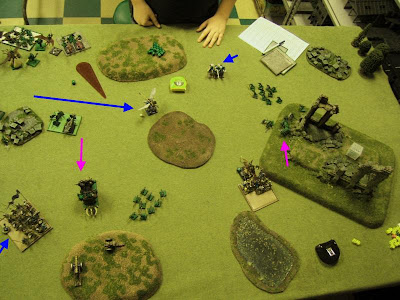 And here we are at the end. The steggie avoids the pike, in spite of my friendly neighbors telling my opponent that he's got nothing to fear from them. In the meantime, the razordons blast away at them. The pegasus takes off, leaving the saurus cav in the lurch and trying to avoide becoming a better target for the razordons. On the right, the salamanders are finished off, and my sworsmen continue to get worn down. Had the game gon a few more turns, they would have eventually broke due to diminishing numbers. As it was, I think I had to make a break test the last round of combat. At least I made my break test, too!


Essentially my swordsmen lost it for me. Had I broke the razordons in combat like I should have, I could have got out of the way of the steggie. It was a move with a risk, but only a small one considering I was starting with a big combat res advantage. You have to take some risks, especially when you've got a decent advantage. I got caught, though. On the right, I was getting lucky in wounding the carnosaur a couple times (3 or 4 wounds by the end of the game!) and he was rolling poorly to wound me. So I was winning combats, fairly significantly for a few turns. I just couldn't get the break (literally) I needed to seal it. A cannon hit on the steggie that actually did something would have helped, too.

So Day 1 ended with a massively frustrating game. Little did I know what Day 2 had in store for me. Bur first...


Friday night we met up with friends for dinner. We were tired from driving around a lot, and spotted an Outback Steakhouse and it sounded like comfort food. Normally we try to get to local places when out of town, but Outback was just too tempting.

So Saturday night we met up with another friend who lives in the area. We met her at Therapy Cafe, downtown. The food was OK. The drinks were pretty good. Excellent, if the number of manhattans I downed is any measure. It was Salsa night, which combined with a long day, a happy belly, and a few strong drinks, resulted in me dancing like a fool. Presumably. I'm not sure, I have no measure since I don't know anything about salsa dancing, which is why my assumption immediately goes to "like a fool." I just tried to follow along with the people around me. We were, apparently, doing it "like back in Honduras" the DJ announced, as he announced one song. My fiance and I had loads of fun with it though, so that's all that matters. I've got to admit, I loved the music. She was looking up local salsa lessons yesterday. :D

So it was a long day and late night for me. Perfect preparation for an early morning checkout and return to gaming.

Posted by ZeroTwentythree at 8:53 PM